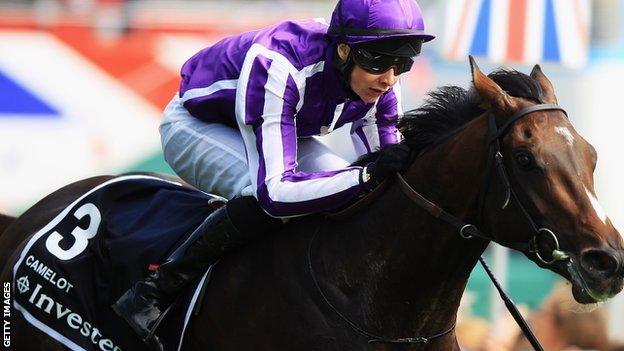 Delighted trainer O'Brien said: "We've never had anything like this before. He had to have courage and strength and speed today."

It was the 42-year-old trainer's seventh Irish Derby win in a row and 10th in all.

It also broke an Irish racing record: Camelot was O'Brien's 28th Irish Classic win, taking him one ahead of the record set by Vincent O'Brien, his predecessor at the Ballydoyle yard in County Tipperary.

The Curragh race was moved from its usual Sunday slot to Saturday evening to boost the attendance.

There was an anxious moment for the crowd when Camelot jinked left over a furlong out as Born To See briefly threatened to overtake him, but the three-year-old colt rallied and powered home to a rapturous reception.

He is now the 16th horse to complete the Epsom and Irish Derby double and the first since Nijinsky in 1970 to claim the Guineas as well as both Derbys.

Camelot is set to compete at the St Leger at Doncaster in September in an attempt to become the first colt since Nijinsky to win the Triple Crown of Classics.