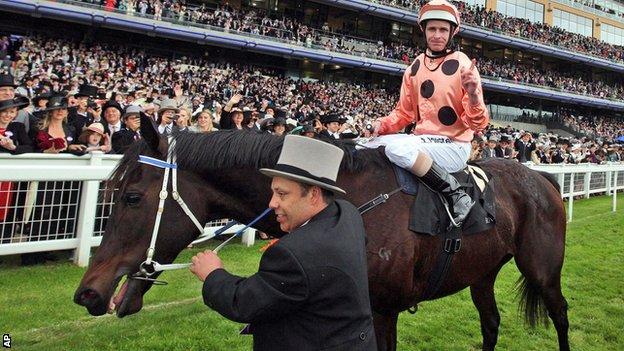 Scans have revealed that Black Caviar extended her unbeaten record to 22 races with a win in the Diamond Jubilee Stakes at Royal Ascot on Saturday despite tearing muscles in her back.

The six-year-old mare will now be given time to recover before any decision is made over her racing future.

"She went into quarantine this morning. We'll reassess her when we get home."

Black Caviar was running outside her homeland for the first time after a 30-hour flight to the UK earlier this month and she achieved victory after holding off Moonlight Cloud by a head, with Restiadargent back in third.

"We're very thankful she won and she needs a bit of a rest now," Werrett told At the Races.

"We want to look after her and she did a great job yesterday.

"She's a high maintenance horse and we want to make sure she's well before she goes to race again. That's something we'll reassess in three or four weeks' time.

"At the moment it is too early."

Trainer Peter Moody added: "She'll now spend four weeks in quarantine and then when we get her home we will give her three months off and get her ready for the Spring Carnival in Melbourne in November."