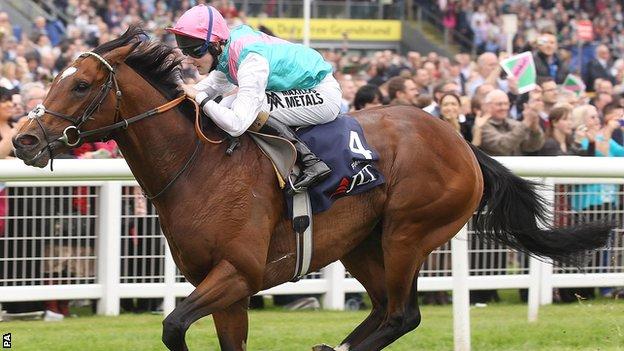 Royal Ascot officials have ordered four kilometres of bunting to deck out the track for this year's five-day meeting.

It will help a fixture said to be among the Queen's favourite events to celebrate the Diamond Jubilee.

However, the sovereign may find herself having to share centre stage with not one but two equine majesties.

Frankel, rated the best in the world, will start things off in the opening race, the Queen Anne Stakes.

But his impressive record - 10 wins from 10 starts - pales against that of Black Caviar, rated second best globally, but the undisputed queen of Australian racing after winning all 21 of her starts to date.

The so-called "Wonder from Down Under" seeks to extend that record in the renamed Diamond Jubilee Stakes (formerly Golden Jubilee) on the final afternoon.

A talked-about clash between the pair was never likely to come off, but having both in action at Royal Ascot is a clear extra boost to the fixture's world-class standing.

The decision by his trainer Sir Henry Cecil to stick to testing Frankel over a mile, a distance at which he rules supreme, in the "Queen Anne" will disappoint some supporters.

They were hoping to see last year's 2,000 Guineas winner, who started his season with success in Newbury's Lockinge Stakes, get the chance to prove himself over a quarter-mile further in the day-two feature the Prince of Wales' Stakes.

But Cecil insists he is in no hurry with the colt that he described last year as the best he has ever seen, let alone trained.

So York's Juddmonte International Stakes in August, over the longer distance, and sponsored by Frankel's owner, Saudi prince Khalid Abdullah, is where new ground will be broken for the first time.

As a betting medium, Frankel's Royal Ascot appearance at 1-6 favourite against Excelebration, a rival he has beaten all four times they have met, may not be massive.

But the fact that a true great gets the chance to strut his stuff on a big, international stage for what will probably be one of the final times in Britain makes the first afternoon one to savour.

This year, Royal Ascot prize money is around 20% up from 2011, and as always, the Queen is scheduled to make her arrival by way of the traditional carriage procession.

In the Prince of Wales's Stakes, she will be hoping to cheer on a Royal winner when last year's Epsom Derby third Carlton House goes up against big Irish hope So You Think.

Ascot favourite Frankie Dettori has been enjoying an uncharacteristically quiet time of late, as has his employer, Sheikh Mohammed's Godolphin stable.

There has even been gossip - all denied - that the Italian might be considering retirement, but that chatter will be soon forgotten if jockey and stable combine for Gold Cup success on Thursday with Colour Vision.

The horse, plus last year's runner-up Opinion Poll in the same race, are Godolphin's big hopes of the week, though the 2011 winner, Fame And Glory, will be a tricky nut to crack.

Were an opinion poll to be commissioned about the profile of racing figures to a wider public, there is no doubt Dettori would score high as would footballer-turned-trainer Mick Channon.

Samitar and the Channon team's Laugh Out Loud, a recent winner in France, look like formidable opponents for all in Friday's featured Coronation Stakes.

For the 300,000 or so who will attend, the big tip has to be to study the new Royal Ascot dress code.

For ladies in the Royal Enclosure, fascinators are out and there is a warning dresses and skirts need to be "of a modest length", while for men cravats are a big no-no.