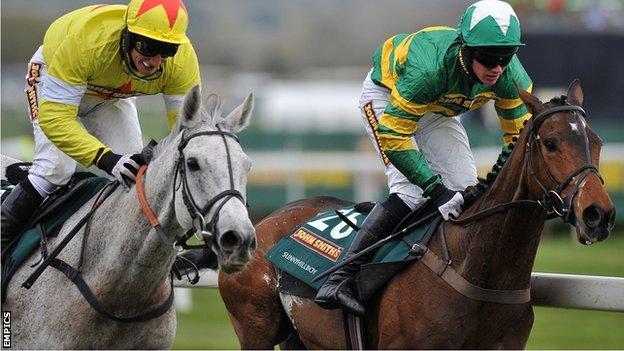 Trainer Jonjo O'Neill has revealed Grand National runner-up Sunnyhillboy was forced to have surgery on a tendon injury after Saturday's race.

The JP McManus-owned nine-year-old narrowly lost out to Neptune Collonges in a photo finish at Aintree.

But the race was marred by fatal injuries to According to Pete and Gold Cup winner Synchronised, who is a stablemate of Sunnyhillboy.

"He's fine now but he was a bit tricky for 48 hours," admitted O'Neill.

"He struck himself badly and he's still in Liverpool. He's had an operation and it went well - that's all you can hope for.

"Everything has gone well, thank God. They've flushed the tendon out so hopefully he'll be ok again next year.

"Hopefully we'll be able to pick him up on Monday."

There was success for O'Neill at the first day of the April meeting at Cheltenham on Wednesday, with Abnaki - ridden by Maurice Linehan - winning the Citipost Novices' Handicap.

The Irishman admitted the seven-year-old's victory was a welcome relief after a difficult week.

"It's tough on everybody but you've got to carry on with life," he added. "It's one of those things and it's the way it goes.

"Getting a winner brightens the yard up, it's the best tonic you can have. Time is a great healer."