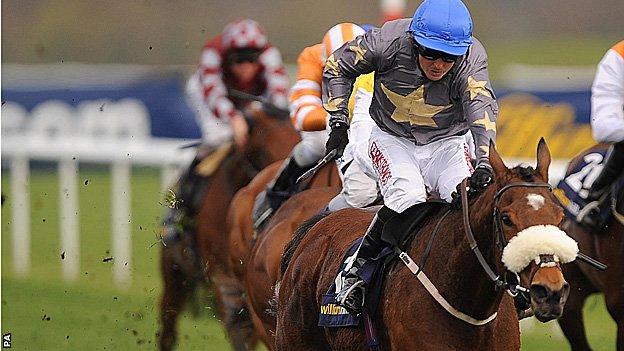 Brae Hill held off the challenge of Mull of Killough to win the Lincoln Handicap in a thrilling finish at Doncaster.

The 2011 runner-up, ridden by Tony Hamilton, led into the closing stages but was chased right to the line.

Shane Kelly mounted a brave late surge on Mull of Killough but could not quite close the gap.

After winning the feature race on the first day of the Flat season, Hamilton said: "He stuck his head down and galloped to the line. I did think I had won."

Brae Hill, a 25-1 chance, had never won over the mile trip but was ridden positively by Hamilton, who made his move early on.

And despite Mull of Killough picking up speed late in the race, the Richard Fahey-trained six-year-old held on by a rapidly diminishing short head in a photo finish.

"I've wanted to win this race, but felt I was destined to never do it," said Fahey. "I think I have had three seconds and plenty of others placed.

"It's great for Tony and I am lucky that I have got some very good jockeys. Tony will never let me down."

Former winners Sweet Lightning and Penitent were withdrawn in the week.

Penitent's trainer David O'Meara said the 2010 winner will instead contest the Prix Edmond Blanc at Saint-Cloud in France on Sunday.