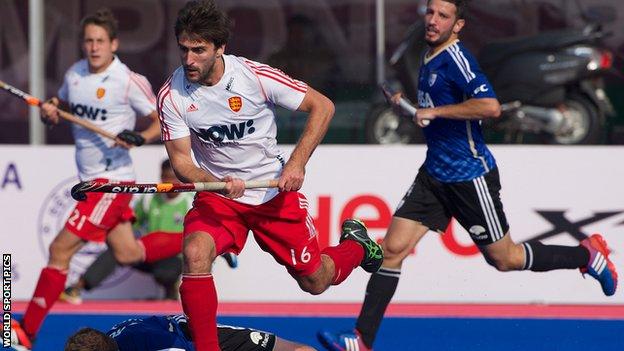 England's men face a play-off to avoid finishing last at the Champions Trophy after a 2-1 defeat by Argentina in Bhubaneswar, India.

England had topped their pool but losses to Germany and now Argentina leave them facing a 7th/8th play-off.

They will play Pool A opponents Belgium at 06:00 GMT on Sunday.

"In games like these you have to take your chances and I'm obviously really disappointed with the result," said England coach Bobby Crutchley.

"But we are now in a position where we are dominating games and it's clear how much progress we've made since our last encounter with Argentina in the summer."

The final will see Germany face Pakistan - the two teams that finished last in their respective pools.

Germany led 3-0 before holding on to beat five-time defending champions Australia 3-2, while Pakistan beat hosts India 4-3 in front of a sell-out crowd of 7,000 at Kalinga Stadium.

Muhammad Arslan Qadir scored the winner with 90 seconds left and the final whistle prompted Pakistan's players to take off their sirts and celebrate wildly.

Pakistan coach Shahnaz Sheikh later apologised after the world governing body said the "behaviour of Pakistan players went beyond what is acceptable to the standards of the FIH".