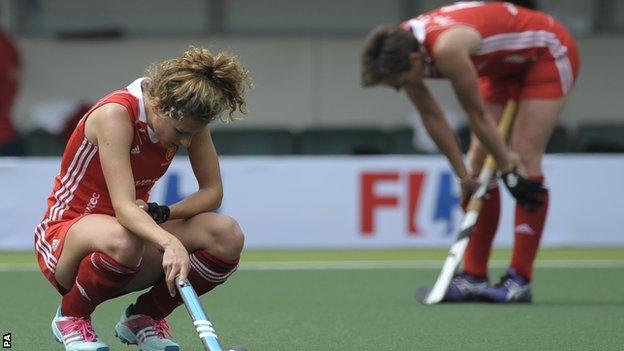 England women have been knocked out of the Hockey World Cup after an emphatic 4-1 loss to South Africa.

Kathleen Turner and Sulette Damons put South Africa 2-0 up in the first half before Shelley Russell and Dirkie Chamberlain increased the advantage.

Nicola White pulled a goal back for England with 15 minutes left but Jason Lee's side were well beaten.

The result left England bottom of Group B after three matches and unable to qualify for the semi-finals.

England, who are ranked third in the world, had high hopes coming into the tournament but lost 2-1 to United States in their opening match and suffered a 3-0 defeat against China in their second pool game.

And they were comfortably beaten by a South Africa team that had also lost both of their opening two matches.

"It's a matter of pride now. We have to prove that we are worthy of wearing the shirt," Richardson-Walsh said.

"We're just not clicking at the moment. We don't make the sacrifice we do, and train as hard as we do, for performances like that."

South Africa took the lead when Turner reacted to a shot parried by England goalkeeper Maddie Hinch to strike the ball home.

England enjoyed a spell of possession after they fell behind but despite some neat build-up play were unable to make it count.

South Africa doubled their lead moments before half-time with a impressive reverse stick finish from Damons.

Russell slid in shortly after the break to notch a third and Chamberlain lifted the ball over Hinch in the 52nd minute to put the match beyond England.

White pulled a goal back three minutes later but despite two late penalty corners England were unable to reduce the deficit.

England coach Lee added: "It's as bad as it gets. We're going to finish the tournament a long way from our potential and our ranking.

"This is rock bottom. As a player and coach this is my fifth World Cup and this is the worst of those worst experiences that's for sure."