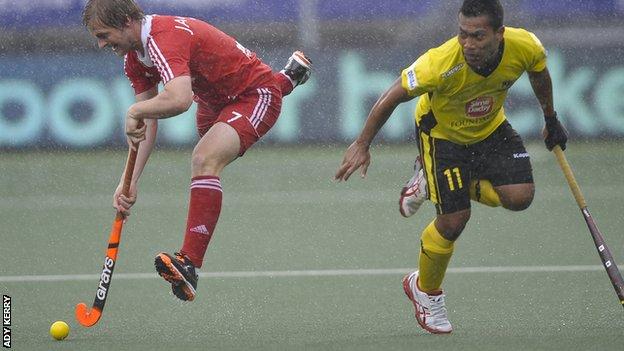 England's unbeaten men remain on course for the World Cup semi-finals thanks to a 2-0 victory over Malaysia.

England scored early with Mark Gleghorne's scooping reverse-stick effort getting the better of goalkeeper Kumar Subramiam in the fourth minute.

But with three minutes remaining, Ashley Jackson eased the nerves by converting from a set-piece.

Malaysia had their chances, with England goalkeeper George Pinner saving from a penalty corner moments before England doubled their advantage.

"I thought we played reasonably well in large periods of the game and created a hell of a lot of chances and we could have killed off the game earlier," said goalscorer Gleghorne.

"Defensively we are pretty sound and if we can continue that and take a few more chances we can hit our straps."

England, who have won two and drawn one match in the Netherlands, will face Australia on Saturday, 7 June in what is their penultimate Group match.