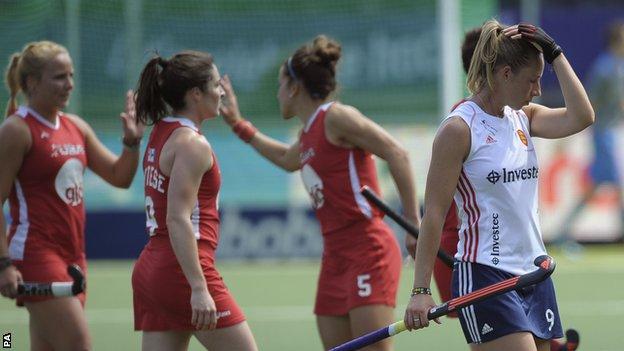 England women suffered a 2-1 defeat by the USA in their opening match of the Hockey World Cup in the Netherlands.

The US took advantage of a nervous start from England in The Hague and went ahead through a Paige Selenski goal and a Kasey Kolojejchick effort.

England captain Kate Richardson-Walsh pulled one back for her side, who exerted some late pressure but could not find an equaliser.

England's next game is against China on Tuesday, 3 June.

"I am angry with our opening few minutes," said Richardson-Walsh.

"A couple of passes went astray and that tentativeness was infectious throughout the team. You can't come to a World Cup and start like that."

England, world ranked number three, must finish in the top two of a group that also includes China, South Africa, Argentina and Germany to reach the semi-finals.

The men's team opened their campaign with a 1-1 draw against Spain on Saturday.