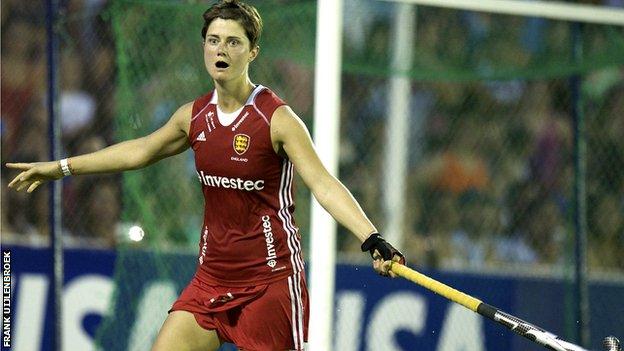 England won bronze in the World League Final in Tucuman after beating hosts Argentina in a dramatic shoot-out.

Laura Unsworth's opener was cancelled out when Sally Walton deflected into her own goal before the break.

Argentina were the better side in the second half but could not make their pressure count, and it ended 1-1 at full-time.

After Julia Gomes Fantasia had her shot saved in the shoot-out, Walton scored the winner as England won 4-2.

It was a painful result for Argentina, who were unlucky to miss out on the final after losing a shoot-out to the Netherlands. The Dutch went on to win the title with a thumping 5-1 win over Australia in the final.

England were rewarded for their hardened defence in the play-off, particularly in the second half, as they bounced back from a 3-0 defeat to Australia in the semi-finals.

It was Argentina who started the brighter, before Unsworth fired England into the lead.

Back came the hosts, attacking in waves as England's defence slowly started to weaken and they deservedly equalised through Walton's own goal just before half-time.

On the resumption, Argentina started where they left off but they could not break down the England defence and the teams were tied at 1-1 after normal time.

Susie Gilbert opened up a two-goal lead in the shoot-out and, after Kate Richardson-Walsh missed a chance to win it, England were given another lifeline when Maddie Hinch - later named goalkeeper of the tournament - saved Gomes Fantasia's effort.

Walton made no mistake with England's second chance to win the match, calmly slotting the ball between the Argentine keeper's legs before wheeling away in celebration.

Captain Kate Richardson-Walsh said: "Picking yourself up after a defeat like yesterday's [against Australia], both emotionally and physically, is so tough, but I'm really proud of how the team played tonight.

"We are definitely learning and growing as a squad all the time."