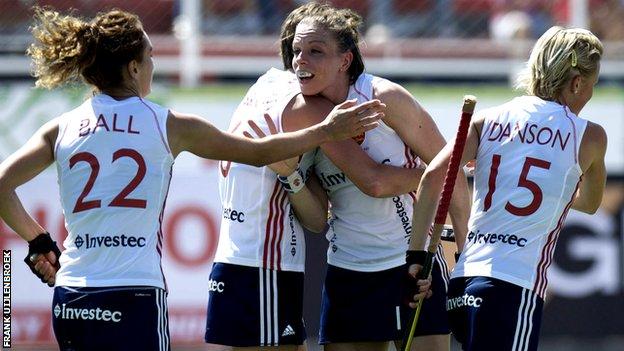 England's women stormed back from two goals down to beat Korea 6-2 in the opening match of the World League Final in San Miguel de Tucuman, Argentina.

Korea started quickly but goals from Alex Danson, Georgie Twigg and two each from Kate Richardson-Walsh and Lily Owsley turned the match around.

England play the Netherlands in their second match on Sunday.

The tournament involves the top eight nations in women's hockey, with Argentina, Australia, New Zealand and China in Pool B.

With the Dutch and Germans to follow, England needed to make a winning start against the eighth-ranked Koreans, but Jason Lee's team looked sluggish and defensively frail on a fiercely hot morning as they found themselves 2-0 down after 20 minutes.

Ki Ju Park opened the scoring with a well-worked penalty corner after 17 minutes, and the Koreans doubled their lead just three minutes later when Seung A Park clipped a clever finish past Maddie Hinch in the England goal.

With a little over three minutes of the first-half remaining, England got the boost they needed thanks to a brilliant finish from Danson, who fired home from the edge of the 'D' following a sweeping move out of defence.

Owsley levelled almost immediately after the resumption from close range following a penalty corner, and a Georgie Twigg penalty stroke put England in front for the first time on 45 minutes.

England were now dominating and Owsley gave them the security of a two-goal lead with a reverse-stick finish after 50 minutes, before captain Richardson-Walsh sealed the victory with two late penalty corner strikes.

"It wasn't a great start of course, going 2-0 down, but we managed to change a few things around and in the end I thought we quite comfortably won and could have scored even more," said England coach Lee.

"I'm also glad we scored quite a few goals because it's such a tight pool of top-class teams, and I think goal difference could play a big part in deciding positions."