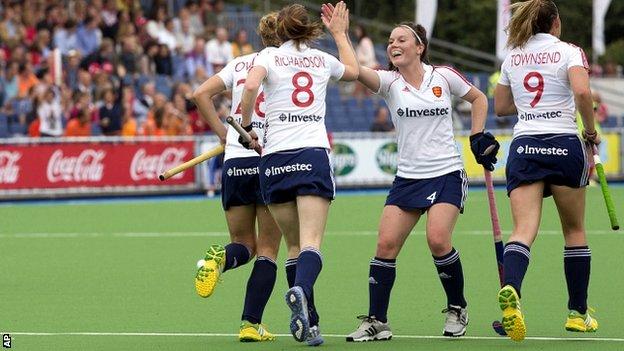 England will hope to finally land gold when they line up among the top eight nations in women's hockey at the World League Final in Argentina.

Coach Jason Lee's squad open against Korea in San Miguel de Tucuman on Saturday, with the Netherlands and Germany completing a daunting Pool A.

England lost to Germany on penalties in the EuroHockey final in August.

"I think one of the most exciting things about this team is we're super ambitious," said forward Alex Danson.

"We're desperate to get into finals and go one better. That's an over-arching goal for this side. We're going to give it our absolute best and hopefully come back with that shiny medal."

Argentina, New Zealand, Australia and China will contest Pool B, before all eight teams move on to the quarter-finals stage.

England qualified for the tournament by taking silver behind Australia in the World League semi-final, a year after many of the squad helped Great Britain to Olympic bronze in London.

"After the Olympics you always lose that bit of momentum, you lose players from the squad and have an influx of youngsters coming into the team.

"The results we've had in the World League and the Europeans, hopefully we can keep building on that and get some good results out in Argentina."

Walsh, 33, is among a number of England players returning from injury, and added: "I sprained my ankle seven weeks ago and when I did it they were thinking I wouldn't be able to get back, so it's been a real race against time and hopefully everything's coming good just at the right time."

England have made just one change to the squad of 18 following the European Championships, with forward Sophie Bray returning in place of Sarah Haycroft.

"We've been working really hard on our fitness since becoming a new group, in the gym and out on the pitch," said Leicester forward Nicola White.

"We like really fast hockey, that's what we're about. I think we do play a fast game and get teams on the counter-attack. We're getting to know each other really well now, which is helping on the pitch.

"I think now our game-play will start to build and we'll start to punish teams and put the goals away, which we weren't doing a few months ago."