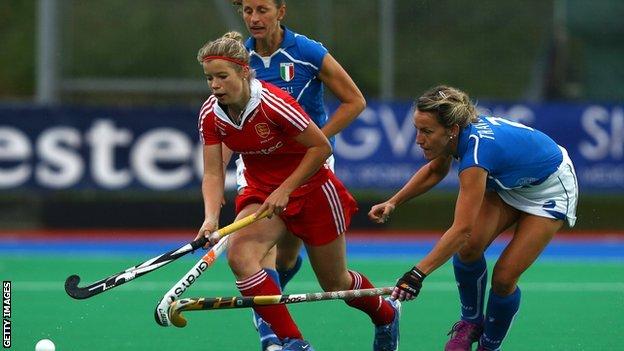 She claimed her first after only three minutes, stroking in from Kate Walsh's pass, before Macarena Ronsisvalli equalised with a clever chip.

Hanna Macleod tapped England back in front and a minute later Danson scored her second with a reverse-stick shot.

They will face an Argentina side on Saturday who defeated South Africa 3-1 in their quarter-final match.

"It wasn't a pretty performance but we're in the semi-final and that's the job we needed to do," Danson told BBC Radio Berkshire.

In the other semi-final, China, who beat Spain 3-0, will face an Australia side who strolled past USA 4-1.

"It's going to be exciting and very quick against Argentina," Danson continued.

"The team that plays professionally and diligently will probably come out with the win. If we can face our own challenges as a team and come out stronger, I think we are going to give them the game of their lives."