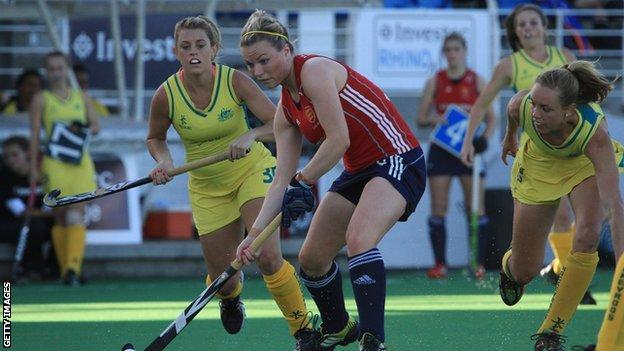 The hosts led at the break through Hollie Webb's first international goal in a keenly contested match.

But Jodie Schulz equalised on the hour-mark to leave Australia top of Pool B because of a superior goal difference.

A draw or win against unfancied Spain on Tuesday will ensure England progress to the knock-out stage.

Their solid performance against Australia came on the back on Saturday's 4-1 victory over South Africa, while the Hockeyroos had trounced Spain 5-0 in their opening match.

In Pool A, Argentina remain the only nation with a 100% record after following up Saturday's surprise win over USA with a gripping 3-2 victory against China.

China fought from 2-0 down to level the match before Carla Rebecchi sealed victory for Argentina with her second effort of the game.

Italy came from behind to beat USA 2-1 in the other match, leaving them sitting third in Pool A, level on points with China.

England forward Alex Danson said that she was encouraged by her side's performance in the game.

"If I'm honest, we've got more to give," the 28-year-old told BBC Radio Berkshire. "I don't feel too disappointed about the game because I know we've so much more to give because we've got some really exciting youngsters.

"Going forward, you wouldn't know the younger players were young. Everybody has stepped up, whether you are younger or older, and that's exciting and a glimpse of what's to come."