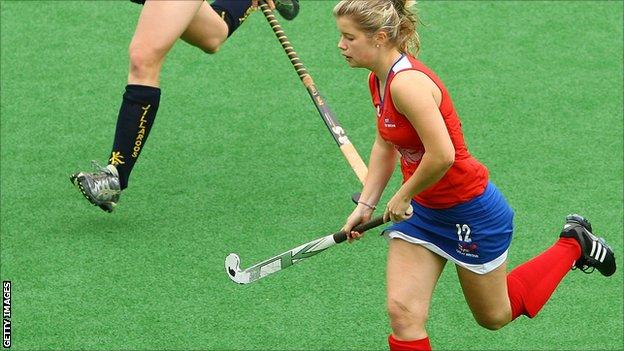 Great Britain and England striker Sophie Bray says the new generation of players are determined to build on the legacy of the London 2012 bronze medal-winning squad.

Several senior members of the Olympic squad have now retired and Bray, 22, is one of several new faces.

She told BBC Radio Berkshire: "It's such a good feeling to be involved.

"The legacy they have left has been fantastic. What they achieved has made it so exciting for the new members."

Bray, who has a degree in psychology from Birmingham University and also played county tennis for Surrey and football for Fulham Ladies, plays her domestic hockey in the Netherlands and believes she is ready for international duty.

"Making the step up is hard but you've got the best of the team with you and I'm ready," she said

Bray also scored the winning goal at the Australian Youth Olympic Festival in 2009 and has her sights firmly set on the Rio Olympics in 2016, but before that will compete in the World League.

"I'm just so excited and I want it to start now," she added.

"The aim is to secure qualification. It's exciting times and no-one knows what to expect. Rio is the goal but you have to take it step by step."

Bray admits it was a tough decision to choose between football and hockey but is certain she has made the right decision.

"There came a time when I had to stop playing tennis, so it was just football and hockey, and then at the age of 16 I had to make another decision," she said. "I felt I had more of a future in hockey and I was enjoying it."