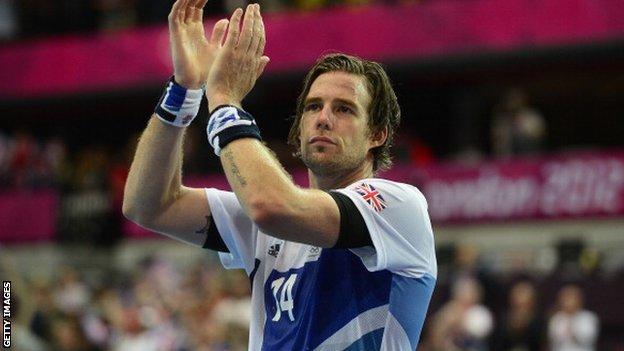 Great Britain's men's handball team lost what could be their last-ever competitive international match, going down 37-26 away to Italy.

UK Sport said in December that handball would receive no funding for the Rio Olympics and the sport has been unable to finance staging any future fixtures.

Players have had to pay their own travel and that restricted them to a squad of 12, compared to Italy's 16.

Already eliminated from qualification for the 2016 European Championships after April's 32-20 defeat to Greece, GB played without pressure and Larsson hit the back of the net three times in the opening eight minutes.

The British team kept the score close for much of the first half, but a late surge from the Italians saw them lead 18-13 at the interval.

GB visibly tired in the second period with their opponents able to rotate their larger squad, but Mark Hawkins and debutant Aston Lang impressed with their goal-scoring endeavours preventing a heavier defeat.

Earlier in the week captain Bobby White said he feared for his side's future in the sport - admitting that without financial support this could be the end of the international team.

However, he was impressed with the attitude and efforts of his team-mates in Italy.

"It's a bit sad it's the last official thing we'll be in, but we're proud of how we performed and can take a lot of confidence from the performance," White told BBC Sport.

"We're used to these difficult situations and we're proud to pull on the GB shirt which I think the public identify with. We'll keep going as long as we can afford to do this."