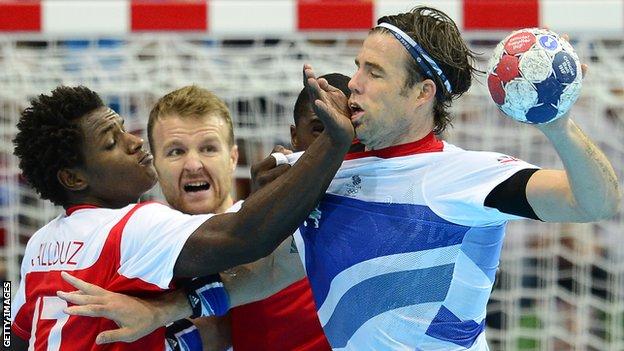 Great Britain's men's handball captain Bobby White says the national team might as well be defunct if funding does not improve.

against Italy after a series of late withdrawals.

"If we can't enter qualification events because of financial constraints, then I don't see the need for a national team," White, 30, told BBC Look East.

"It's sad to say, but unfortunately that's the reality."

Handball received £2.9m from UK Sport in the build-up to London 2012 but, after the men's and women's teams failed to register a single point at the Olympics, the sport lost its funding towards Rio 2016.

Athletes now have to find sponsorship or pay their own expenses, and the cost of flights to Italy has prevented GB from taking a full squad of 16 to Wednesday's game.

Britain cannot qualify for the 2016 European Championships, having lost all three of their qualifying matches so far, and may not be able to fund a World Championship qualifying campaign from October.

"I didn't expect a huge amount of investment from UK Sport, but I expected something and the promises of legacy to shine through," said Milton Keynes-based White.

"We have been left in the lurch a little bit. We need to find ways outside of the remit of UK Sport to push on."

While elite-level handball struggles in the UK, the grassroots is thriving, but White is concerned youngsters will be driven out of the game as they grow older.

"There has been about a 40% increase in school participation since London 2012," he added.

"I believe that will continue to grow and we will get to the point where these kids will be looking to represent GB and may be turned off when they realise they have to pay for their own flights to play in Europe."