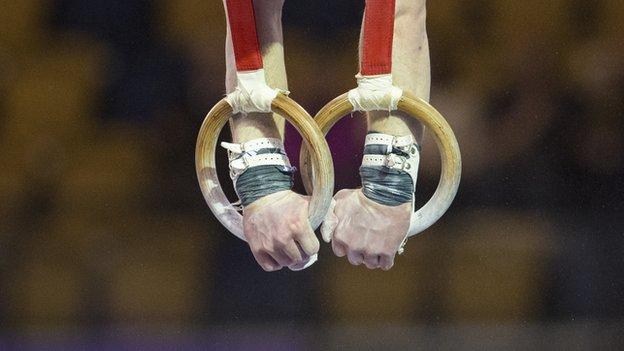 He edged out his club-mate, David Weir, while Commonwealth silver medallist Frank Baines won the bronze medal despite only competing in five of the six apparatus at the Perth event.

The 18-year-old finished ahead of Sofia Ramzan (Dundee), while Carly Smith won the bronze medal.

Dan Purvis, the London 2012 Olympic Games team bronze medallist and winner of the national title for the last three years, finished fourth, having only competed on three of the apparatus - the floor, pommel and parallel bars.

The result was no real surprise to the 26-year-old, who is focusing on the bigger picture.

"It was a bit of a warm up," Purvis told BBC Scotland. "The last time I competed was last year so I wanted to get back into it.

"There's a new cycle and a new code (scoring method) and the idea is to get my three pieces up for the start of the year. Then the other three later on in the year so by the Commonwealth Games (2018) I'll be back on all six."

Scotland's men won team silver at the Glasgow 2014 Commonwealth Games and Purvis is positive about the nation's prospects for the Gold Coast 2018 event.

"The whole of Scottish gymnastics has improved so much," he said. "From years ago when I was here to now, the difference is fantastic and it's all looking good for the Commonwealth Games.

"There will be a lot of pressure riding on this new team but the talent is coming through. We saw Frank Baines today doing fantastic and a lot of the gymnasts are doing really well. Kelvin Cham and Liam Davis too.

"The set-up in Scottish gymnastics is fantastic, the coaches are just so much on the ball with it and it's great to see."

Having not made the final team for the Rio 2016 Olympic Games, going as a reserve only, Purvis is determined to compete at the 2018 Commonwealth Games, and will not rule out aiming for the Tokyo 2020 Olympics.

"It was very difficult (not making the team for Rio)," he said. "But speaking to my coach Jeff Brookes, he's supported me through my whole career and we just thought we owe it to ourselves to go all out at the Commonwealth Games and hopefully do the best we can there and see what happens.

"I'd love to carry on (after the Commonwealth Games), but it'll be two years before the next Olympics so we'll have a good feeling of where we're at then."