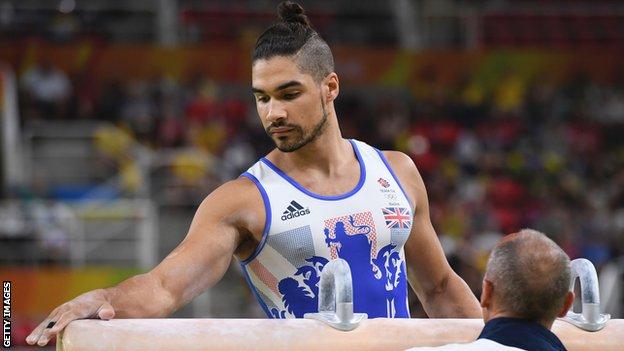 Four-time Olympic medallist Louis Smith says he receives death threats "every day" after a video was leaked in which he apparently mocks Islam.

Smith, who could face "suspension or expulsion" by British Gymnastics, did not state where the death threats came from.

Speaking to BBC Radio 5 live, he said he has experienced "a lot of hatred from the Muslim community" after the video surfaced.

"It's a very scary situation," he said.

"I am very ignorant to religion but I am an ethnic minority myself and have been on the receiving end of racist comments. I do not condone racism at all.

"Some people from the Muslim community have been understanding. Some people have been angry, but once I have apologised, they have then said 'we are taught to forgive - we are peaceful'.

"And at the other end of the spectrum I've had death threats. Every day online. I'm cautious and I'm stressed."

Smith, who has won medals at the past three Olympic Games, has already been censured twice this year by British Gymnastics.

In April, he apologised for questioning the judging at the British Championships, where he was beaten to pommel gold by Max Whitlock.

He was also reprimanded in June for posting an image on social media of an American gymnast, who was 16 when the photograph was taken, accompanied by a comment British Gymnastics said was "unbefitting to a participant".

How the latest incident unfolded...

Smith was at his friend's wedding when the incident happened in the bar at around 05:00 BST. He was with retired Irish gymnast Luke Carson.

"We were singing Disney songs from the Lion King and Jungle Book. We were acting out pretending to pick up palm trees like the Bare Necessities," says Smith.

"Then we went on to Aladdin and I was saying, "we need a magic carpet" and then Luke went to grab a tapestry off the wall and then put it on the floor.

"And that's when things went a bit sour and we went into a shameful thing of mocking Islam prayer. It was a very silly thing for both of us to do.

"Given the amount of alcohol we had consumed and the silly mood we were in we found it hilarious at the time.

"What people saw in that video is not a representation of what I stand for and my moral fibre."

'Being a role model is incredibly hard'

Smith, who has been a key figure in the rejuvenation of men's gymnastics in Britain, says he finds being a role model "incredibly hard".

"I've bounced through life making mistakes and a lot of the time people haven't heard about them because it was before I was in the public eye," he said.

After he was diagnosed with ADHD at the age of seven, Smith was taken to a gymnastics club by mother Elaine to channel his energy into something constructive.

"I've come from a single parent family, grew up on a council estate and have been surrounded by tough places and tough education," Smith said.

"The only thing that has been a saving grace for me has been the support from my mum and my gymnastics."

Speaking about his mother's reaction to the video, Smith said: "I like to think she brought me up to be a better human being than this.

"And that's been the hardest part to deal with - letting people down close to me and those that look up to me. I'm ashamed to have put people in this position."

Has he considered retirement?

Asked if the controversy has made him contemplate quitting the sport, Smith said he was "not quite at that point".

"I still think I have a lot to offer," he said. "I proved in Rio that I can still win medals for my country. We'll just have to wait and see what British Gymnastics decide to do."