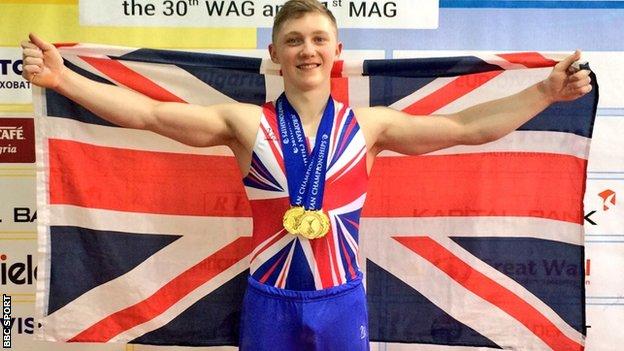 Wilson, 18, won the pommel horse, parallel bars and high bar events on Sunday - adding to all-around and team successes earlier in the week.

Giarnni Regini-Moran, Brinn Bevan and Jay Thompson also secured medals as GB surpassed their previous haul of seven, with 11 at the European Championships.

"For me personally I don't think it could have gone any better and as a team we have shown just how strong this country is."

Regini-Moran, 16, claimed gold on the floor and vault silver despite competing with a heavily strapped ankle - having required hospital treatment on Saturday.

"I fell running for the team bus and was really worried I'd broken something," the teenager admitted.

"It did hurt today but I have a saying that 'pain is temporary and pride is forever' so I wasn't going to drop out."

Bevan was second on both the rings and parallel bars while Thompson won floor silver and their success follows a record-breaking haul of six medals for GB's junior girls at their Europeans last week.

For Leeds teenager Wilson, the competition in Sofia, Bulgaria, represented his final junior event and he will now switch to senior competition and hopes to represent England at the Commonwealth Games later this summer.

"I'm going to train hard to try and make that team because some of the British squad are Scottish so there could be an opening," he said.