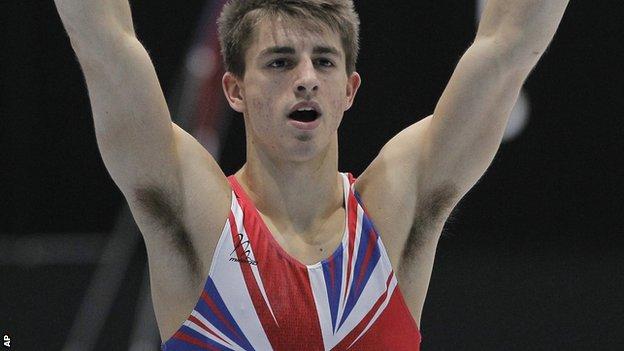 Max Whitlock believes victory for the British team at the European Artistic Gymnastics Championships in Bulgaria this week will boost home-nation medal prospects at the Commonwealth Games.

Whitlock, 21, is part of a five-strong Great Britain squad looking to defend the team title they claimed in 2012.

The double Olympic bronze medallist is expected to compete for England in Glasgow later this summer.

"The growth in the sport since the London Olympics [where the team won four medals], has been incredible and every medal makes us more confident going into every event, including the Commonwealths and Worlds later this year."

In addition to Whitlock, who won individual European floor gold in Moscow in 2013, Kristian Thomas and Sam Oldham are also likely to be selected for the England Commonwealth team.

Fellow GB squad members Dan Keatings and Dan Purvis should receive call-ups for Scotland, but retaining their European crown with Britain is their first priority.

"We have so much cover on every apparatus, which makes this definitely one of the strongest squads we have ever had," Keatings told BBC Sport.

The gymnast, who missed London 2012 through injury, topped the pommel horse podium at last year's Europeans - with Whitlock third - and he expects another tough battle.

"There is a rivalry, but it's a good one because we both see each other doing well and it makes us push harder in every training session," he said.

"That's great for the team because there's no other nation that's scoring as highly as we are on the pommel, which gives us a great chance."

The men are seeking to build on the success of the women's squad who won individual gold through Rebecca Downie as well as team silver in Sofia last week.