Tiger Woods is "awake and responsive" following surgery on serious leg injuries suffered in a car crash in Los Angeles on Tuesday.

The 15-time golf major champion, 45, had to be "extricated from the wreck" by firefighters and paramedics.

The American suffered "open fractures affecting the tibia and fibula bones" in his lower right leg "stabilised by inserting a rod into the tibia".

Injuries to his foot and ankle have been stabilised with screws and pins.

Anish Mahajan, chief medical officer of the Harbor UCLA Medical Centre where Woods is being treated, said the open fractures were comminuted, meaning broken in more than two pieces.

Mahajan added: "Trauma to the muscle and soft tissue of the leg required surgical release of the covering of the muscles to relieve pressure due to swelling."

Woods 'not able to stand'

Woods was "fortunate to be alive" said a deputy from the LA County Sheriff's Department, who was first on the scene of the accident at 07:18 local time on the border of Rolling Hills Estates and Rancho Palos Verdes.

Carlos Gonzalez said the golfer was "not able to stand under his own power" before being removed from the vehicle which had sustained major damage.

He said that the American was wearing his seatbelt and was "still calm and lucid" when he told him his name.

"It's very fortunate that Mr Woods was able to come out of this alive," he added.

LA County Sheriff Alex Villanueva said that Woods' car "crossed the centre-divider to the point that it rested several hundred feet away" and "that indicates they were going at a relatively greater speed than normal".

On Wednesday, Villanueva said no charges were expected to be filed against Woods.

"This remains an accident," he said. "Accident is not a crime. They do happen, unfortunately." 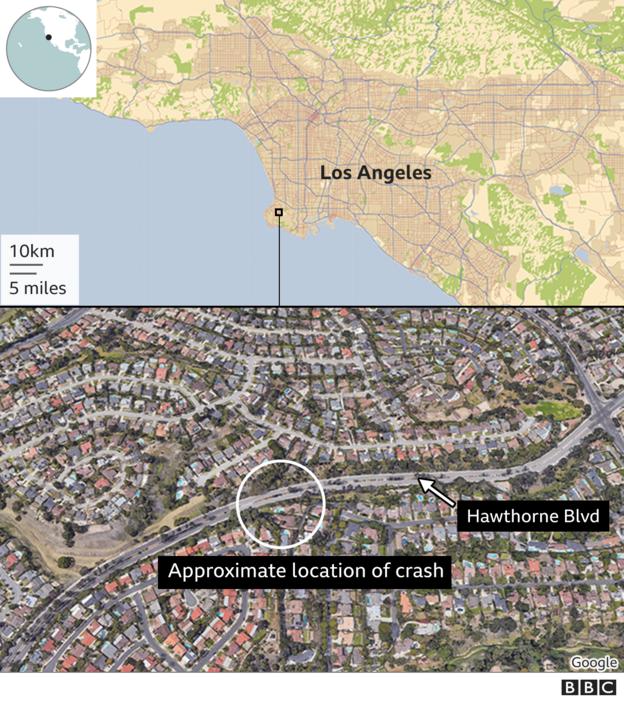 He added: "However, because it is downhill, it slopes and curves, that area has a high frequency of accidents. It is not uncommon."

He said the car hit a kerb, a tree and rolled over several times. Villanueva added "there was no evidence of impairment" with Woods.

Former US president Barack Obama, tennis great Serena Williams, basketball star Stephen Curry and singer Mariah Carey were among the many celebrities who posted their messages of support on social media.

World number three Justin Thomas is one of Woods' best friends on the PGA Tour and expressed concern for his compatriot.

"I'm sick to my stomach," an emotional Thomas said. "You know, it hurts to see one of your... closest friends get in an accident.

"Man, I just hope he's all right. Just worry for his kids, you know. I'm sure they're struggling."

A statement from PGA Tour commissioner Jay Monahan said: "On behalf of the PGA Tour and our players, Tiger is in our prayers and will have our full support as he recovers."

Woods, who had been recovering from a fifth back surgery in January, was in Los Angeles to host last week's Genesis Invitational PGA Tour event and was driving one of the tournament cars when he crashed.

Woods was involved in a car crash in November 2009 which eventually led to admissions of infidelity and the breakdown of his marriage. He then took a break from golf but returned shortly afterwards.

Following five wins in 2013, Woods started just 24 events in the next four years because of chronic back pain and multiple surgeries.

In 2017 Woods was arrested on suspicion of driving under the influence when he was found asleep at the wheel of his car. He later pleaded guilty to reckless driving.

He had five prescription drugs in his system as he recovered from the spinal fusion surgery that ultimately gave him a second golfing career.

Woods ended an 11-year wait to claim a 15th major title when he won the Masters at Augusta National for a fifth time in 2019.

He jointly holds the record for most PGA Tour wins at 82 with Sam Snead and is three behind Jack Nicklaus' mark of 18 major titles.

Woods recently said he had hoped to recover from his back surgery in time to play in this year's Masters in April.

'A very serious situation for his career'

This is now a very serious situation for his career.

He was on American television on Sunday. A lot of observers were concerned at how hesitant he was about the nature of the progress that was being made in terms of his recovery and whether or not he would be fit for the Masters.

All thoughts of that now go completely out of the window and are no longer a priority.