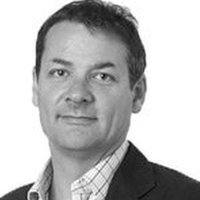 Golfer Ed Sandison resumed playing in spectacular style with his first hole-in-one with his very first shot after lockdown restrictions were lifted.

The amateur player made his perfect return at Styal Golf Club in Cheshire on its 176-yard par-three opening hole.

Playing with his father-in-law Tony Sweeney, Sandison struck a 4-hybrid and was initially simply relieved to have made decent contact.

"I hadn't swung a club through lockdown," he told BBC Sport.

"We haven't got any nets in the garden so it was genuinely my first shot on the first hole for my first hole-in-one and I've genuinely never come close before."

The 34-year-old from Berkhamstead has been staying with his in-laws since Mother's Day on 22 March.

"We have a 15-month-old daughter and that helped with childcare so it made sense to stay here," Sandison added.

"Tony speculatively tried to book a tee time last week when it seemed like things were going to open up again and the first slot we could get was Wednesday morning."

The pair teed off at 09:04 as thousands of golfers all over England took advantage of eased coronavirus lockdown restrictions. None will have made a better start than the 18-handicapper, who tries to play at least once a week in normal circumstances.

"I thought that's quite a nice shot, hopefully it's up on the green," said Sandison.

"I was just relieved it went in the air to be honest because I only had a few balls in my bag and I didn't want to lose too many too early.

"I couldn't see my ball on the green as we walked up. I looked around the fringes and I thought, 'I'll have a little look at the hole, just in case' - and I could just see the top half of the ball sticking up from the inverted cup.

"Then we got the cameras out and filmed and it all went a bit crazy. It was absolutely fantastic and I spent the rest of the round just laughing because I couldn't believe it happened."

Fellow golfers offered congratulations and many pointed out Sandison's good fortune that clubhouses remain shut. Tradition dictates anyone making a hole-in-one should buy all the drinks at the bar.

He went on to play five strokes below his handicap. "I'm not a great golfer but I got 41 points and it was probably the best round I've ever had, unbelievable," Sandison added.

Read more on Stars call on NFL to condemn racism