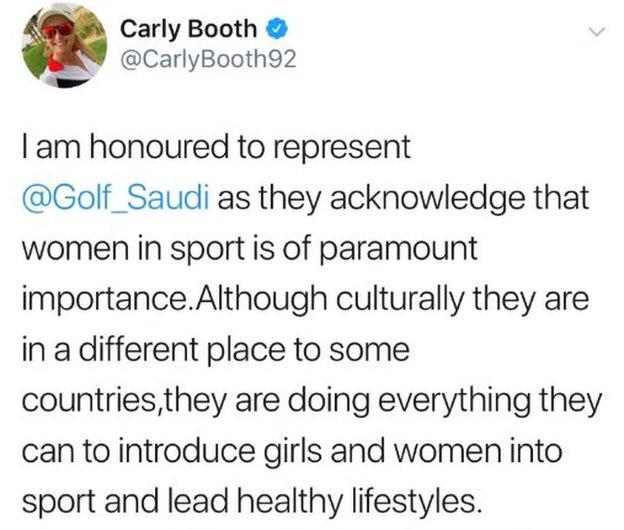 Carly Booth will remain an ambassador of Scottish Golf despite drawing criticism over her sponsorship deal with the Saudi Arabia Golf Federation.

European Tour pro Booth tweeted on Wednesday about her partnership with Golf Saudi before deleting the post.

In March, the 26-year-old became an ambassador for Scottish Golf to help grow the girls' and women's game.

In a statement, the organisation said her "influential social media presence" is "in line with our strategy".

Booth's tweet said she was "honoured" to represent Saudi Golf, even though the country "culturally are in a different place".

It came on the same day the Saudi government, condemned for their human rights record, executed 37 people, according to Amnesty International.

The Scottish Golf statement said: "In order to grow the game, we need to make it more accessible and attainable for girls and young women.

"Carly's commitment to her sport and her influential social media presence, where she promotes a positive lifestyle and healthy living to tens of thousands of girls, is helpful in changing perceptions around girls' and women's golf, in line with our strategy."

Booth, who is six shots off the lead and tied for 14th after her first round in the Ladies European Tour event in Morocco, played a pro-am in Saudi Arabia in February.

She was also an official ambassador for the inaugural European Golf Team Championships at Gleneagles last August and hopes to qualify for the Solheim Cup, also to be held at Gleneagles, in September.