Scotland's Russell Knox beat New Zealand's Ryan Fox on the first hole of a play-off to win the Irish Open.

World number 87 Knox, 33, won by holing a 40-foot birdie after knocking in an almost identical putt to card a six-under 66 and force the extra hole.

Fox missed a 10-foot putt to win on the 72nd hole as he signed for a 68 to also finish on 14 under at Ballyliffin.

He then saw an effort from a similar distance lip-out when they replayed the 18th to hand victory to Knox.

"It was obviously a putt you're going to miss way more times than you make," said the 33-year-old Scot after the dramatic finish to the tournament.

Fox, along with England's Andy Sullivan and South African Zander Lombard, had the consolation of clinching an Open Championship spot for the three leading non-exempt top-10 finishers at Ballyliffin.

Van Rooyen's four-stroke lead was cancelled out when Fox birdied the 11th to join the South African on 12 under.

Van Rooyen had birdied the fourth to move to 15 under but his three bogeys in four holes from the sixth gave hope to the chasing pack.

World number five Rahm looked out of contention following a triple bogey at the second but an eagle at the sixth undid some of the damage and his four closing birdies included a tap-in at the 18th after his wedge approach hit the pin.

The victory earned Knox a prize of almost £890,000 and his first win since the Travelers Championship in the US in 2016 as he moves up to fifth place in the Race to Dubai standings.

He secured his Open Championship berth by sharing second at last week's French Open and now heads home for next week's Scottish Open at Gullane before teeing up at Carnoustie.

The Scot will move back into the world's top 50 as a result of a win which boosts his hopes of a first Ryder Cup appearance in September. He has jumped to eighth in the European Ryder Cup standings.

"To make that team, you have to win tournaments. It's a great start with this win and last week as well. My focus is on trying to qualify for the team," added Knox. 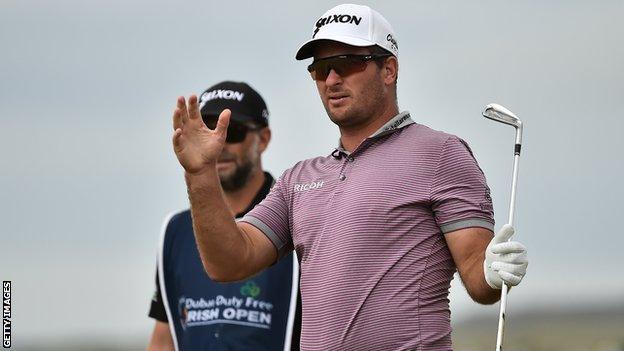 Fox, who has not won on the European Tour, looked in control of the tournament when he moved two clear after birdies at the 12th and 13th before bogeying the 14th.

After being joined on 13 under by Knox and Campillo, Fox had a glorious chance to moved two ahead again with a 12-foot eagle chance at the 17th but the putt slipped by to leave him one ahead.

Fox still looked the likely winner as Knox's approach from rough ended up 40 feet from the pin but incredibly the Scot holed which left the New Zealand needing a closing birdie to win.

A pitch to 10 feet gave Fox his opportunity but the putt slid by to ensure the play-off.

Rory McIlroy finished his four-year stint as tournament host by finishing in a share of 28th place on two under par after a closing 71.

After struggling badly on the greens over the opening three days, McIlroy was happier with his putting performance in a round which included three successive birdies from the 11th.

McIlroy revealed that his putting consultant, former US Ryder Cup player Brad Faxon, had delivered a pep talk in an overnight email.

"He also sent me a couple of videos of my body language after all the missed putts this week," laughed the four-time major winner.

"It was a good little reminder that attitude is very important out there on the greens. It seemed to help out there today."

McIlroy expressed delight at the success of this week's Ballyliffin event after the European Tour's decision to bring the tournament to the Donegal venue for the first time.