Billed as one of golf's toughest tests, the 2017 US Open looks set to push the world's best to their limits as Erin Hills prepares for its first major.

At nearly 8,000 yards, the 11-year-old links-style layout will be the longest course in the championship's history.

World number one and defending champion Dustin Johnson heads the field in Wisconsin, where knee-high rough has dominated the pre-tournament debate.

Who are the main contenders?

American defending champion Johnson missed the Masters in April after slipping on steps and hurting his back on the eve of the tournament.

Fit again, the big-hitting 32-year-old is bidding to become the first player to win back-to-back US Opens since Curtis Strange in 1988 and 1989.

Johnson had said he would not travel to Erin Hills until the birth of his second child with his expectant partner Paulina Gretzky.

But after arriving in Wisconsin on Tuesday evening following the birth of his son, the world number one says he is ready for the course's challenge.

"I tend to focus more and play better. It's just a very, very difficult tournament to win." 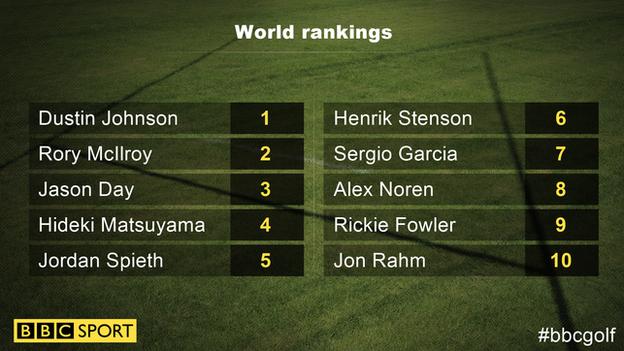 Johnson will be grouped with previous US Open winners Jordan Spieth and Martin Kaymer in Thursday's opening round.

Spieth beat fellow American Johnson to the title in 2015 and was in contention until the final round last year.

"It's always a physical test," said the world number five. "It's a big golf course. It's a tough one to walk."

The 23-year-old Texan has failed to add to his major tally since 2015, when he also won the Masters, and has just one PGA Tour victory to his name this season.

But he is one of the few players in this week's field to have competitive experience of Erin Hills, having played at the venue in the 2011 US Amateur Championship.

"Most of all it certainly tests the mental game more than any other place in golf," added Spieth. "And I've witnessed that on both sides of things.

"If you came for a stress-free tournament you didn't come to the right place. And we know that going in."

World number two Rory McIlroy has insisted he is "totally fine" and ready to challenge this week as he returns to action after a month out because of injury.

The Northern Irishman believes the Erin Hills course is one he can thrive on.

"I don't think it's a secret that I feel like my driver is one of the biggest weapons in my bag," he said.

"If I can get that in my hands more regularly, and I think if the field has to hit driver more, that plays into my hands too."

Spaniard Sergio Garcia heads into the tournament on the back of his first major win, claiming the Green Jacket at Augusta in April.

The 37-year-old world number seven hopes to draw on his Masters win in the season's second major.

"Every tournament is tough to win and majors are even tougher," he said. "And a US Open, we all know how difficult they are."

In the modern era, only two players have won multiple majors after claiming their first aged 37 or older, with Angel Cabrera winning his first of two at that age and Mark O'Meara winning twice in 1998 aged 41.

"I still feel in good shape and my game feels nice. I'm still working hard on it," added Garcia.

Debate around the cut of the rough at Erin Hills has divided opinion among those set to play the longest course in major history this weekend.

The striking aspect of this venue is the distance - the par-five 18th can stretch to 675 yards - but the United States Golf Association (USGA) has faced questions over knee-high grass that lurks a few feet off the fairways.

Fescue was cut from holes four, 12, 14 and 18 on Tuesday as organisers believed wet weather made the areas unplayable - especially with more rain forecast for the tournament days.

Many holes feature blind or semi-blind tee-shots, while the course's mid-section runs on an outward-inward path that will ensure players face variable winds.

Spain's Jon Rahm said the US Open venue was "like a links golf course on steroids".

England's Lee Westwood posted a video of his caddie crawling through the rough, while American Kevin Na was more scathing of the set-up.

But McIlroy and Spieth both dismissed claims there was anything wrong with the lie.

The Northern Irishman said: "If we can't hit within that avenue, you might as well pack your bags and go home."

Will Mickelson make it?

Mickelson retains a tee-time, but unless the weather conspires in the 46-year-old's favour he will not return in time for the first round.

Amanda was born a day after the championship in 1999 when Mickelson finished second to Payne Stewart, with the US Open the only major still to elude the American.

With Tiger Woods also absent, this year's US Open could be the first time since 1994 that neither player has featured in the first round.

Who are the UK hopefuls?

World number two McIlroy heads the UK's hopefuls, but England's Justin Rose is another former champion hoping to impress in Wisconsin this week.

Rose, who suffered a play-off loss to Garcia at the Masters in April, is looking to be in the mix come Father's Day on Sunday.

"I do feel like I'm beginning to trend into this tournament," said the 36-year-old, who dedicated his 2013 triumph to his late father Ken.

"So although the results might not be there to kind of back that up, I feel good about where the week can go for me from here."

Compatriot Tyrell Hatton is making his US Open debut and will be in the sixth group out on Thursday.

"It's a dream come true for me to be playing in the majors," the world number 18 told BBC Sport.

"If I can stay relaxed and play my A game I'll have a good week."

The 41-year-old will be joined by the likes of Luke Donald, Lee Westwood and Andrew 'Beef' Johnston in a 14-strong English contingent.

Aaron Rai. The 22-year-old from Wolverhampton will be making his major debut having earned his US Open spot by winning the international sectional qualifier at Walton Heath.

The world number 166, who was playing on the Alps Tour six months ago, secured his first Challenge Tour victory earlier this season when he won the Kenya Open.

"It's a dream come true to play in any major, and with it being the US Open it makes it extra special," he said.

"I've just had the best six or seven months of my life."