Being a World Golf Championships event there is no cut, so the 27-year-old Northern Irishman will have a guaranteed four rounds to ease his way back into the competitive fold.

McIlroy has been battling a stress fracture in his ribs, which has limited him to only one competition so far this year. But the four-time major champion showed his recovery was on track with 18 holes in the company of President Donald Trump just over a week ago.

Given the current political climate, the round prompted plenty of discussion as has the wider decision of golf's authorities to move this week's WGC event to Mexico. 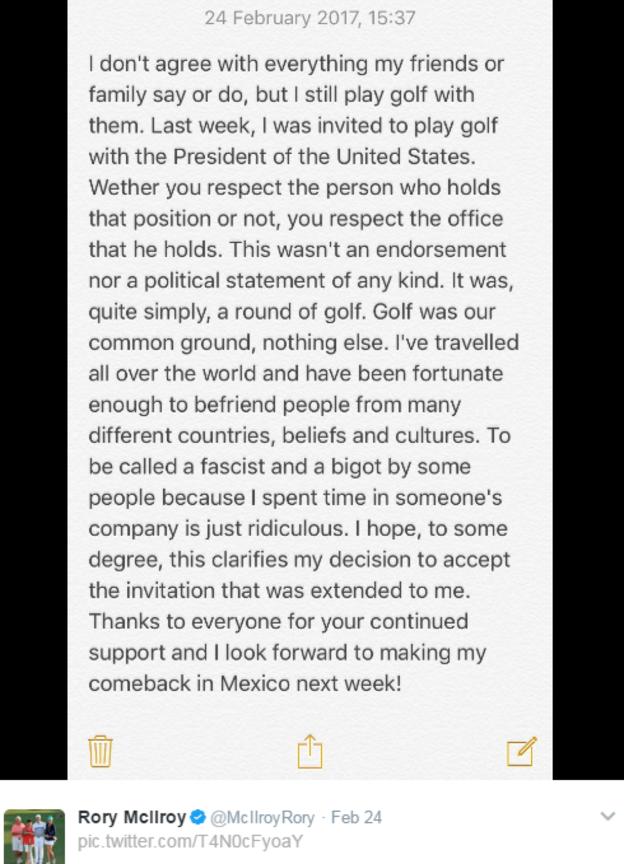 For many it is a delicious irony that the tournament which was staged at the President's Doral resort near Miami is being relocated to the country that dominated so much of his campaign rhetoric.

Indeed, with golf often shown to be discomforted by his core messages, it would be easy to interpret the move to this new location as being a significant statement against the president.

But do not be fooled into thinking that the sport has acquired a new social conscience or desire to have a say in the currently febrile American political scene.

A decision to move the tournament to Mexico was taken last year, before Trump became president and professional golf is doing what it always does; it is following the money.

Once Cadillac signalled they would not be renewing their contract backing the WGC Championship at Doral, a move away from the Florida resort - bought by Trump in 2012 - became highly likely.

This is despite the billionaire's company investing $250m (£200m) in the redevelopment of the Florida venue and its Blue Monster course.

The problem with staying at Doral for prospective replacement sponsors was that they would end up sharing attention with its owner, a personality who would inevitably distract coverage from their investment.

Coughing up the sort of money needed to sustain a WGC deserves maximum exposure and so we have witnessed a departure from a venue that has had a 54-year association with the PGA Tour.

Few would have anticipated that the next home for this tournament would be in Mexico, but a seven-year deal was struck with Grupo Salinas - a conglomerate of companies overseen by another billionaire Ricardo Salinas.

Although it is only a relatively short leap over the border, the move weakens the American grip on the four WGC tournaments because now only two - the Matchplay in Austin and the Bridgestone in Akron - are staged in the United States. The other is played in Shanghai in October.

McIlroy has been vocal about the need for these tournaments to do what they say on the tin and embrace the "World" part of their title. He would like to see them taken to the likes of Australia and South Africa.

But that will only happen if backers are found to make it financially worthwhile. This week's prize fund is $9.75m (£7.8m) and that is an awful lot of Rand, Aussie dollars or, for that matter, Sterling.

WGC tournaments attract the world's best players but often struggle to resonate with a wider audience. The fact that so many of them have been played in the US makes them more difficult for fans to distinguish from standard PGA Tour events.

So perhaps the move to Mexico will help in this regard. Certainly the year's first gathering of all the world's top players - apart from Jason Day, who has an ear infection - will be played before a new audience.

And the long-term nature of the deal gives the Mexico Championship a chance to grow and carve a proper niche in the golfing calendar.

For McIlroy, though, the priority is not this wider picture but taking the chance to prove he has fully recovered from an injury that wrecked his original tournament-heavy pre-Masters plan.

Golfing with the president is one thing, setting yourself up to win the one major to have so far eluded the world number three is quite another.

It is now back to the day job and one that doesn't require McIlroy to jump on social media to defend his participation.

Incidentally, a recent New York Times poll of PGA Tour professionals found 50 out of 56 saying they'd be willing to play with Trump.

McIlroy's Twitter explanation that his round with the president was no political endorsement should signal the end of the conversational phase of his golfing year.

Now it is time for McIlroy's clubs to do the talking. Especially as there are only a handful of events to be played before the biggest date in his golfing calendar, the first full week of April, and the Masters.