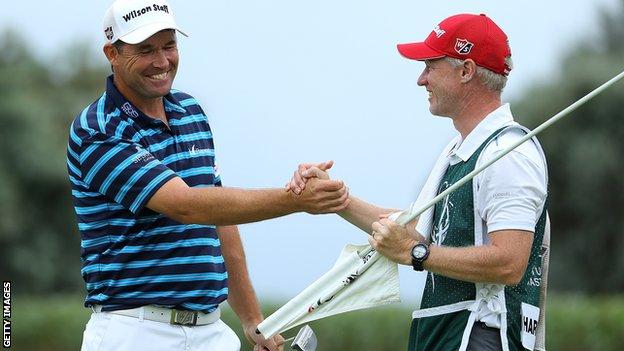 The Irishman shot a final round 65 for a 23-under-par score, finishing ahead of defending champion Andy Sullivan.

It was his first European Tour win since the 2008 US PGA Championship.

Harrington said: "It's a big win. I tried to be really aggressive. The golf course really suited me and I just tried to go after every pin I could."

A third birdie of the week for Harrington on the penultimate hole followed by a par on the last held off the challenge of Sullivan, who was attempting to become the first man to successfully defend the title at the Victoria Clube de Golfe in Vilamoura.

"I have a pretty good short game that was on form this week. No matter where I hit it, I felt like I could get it up and down," added Harrington, whose tally of Tour victories now stands at 15, level with Thomas Bjorn at 15th on the all-time list.

The semi-retired Anders Hansen and Finland's Mikko Korhonen were two shots behind and tied for third.