Europe captain Darren Clarke said he would "not have changed anything" despite the 17-11 Ryder Cup defeat by the United States at Hazeltine.

It is the first time the Americans have won the trophy since 2008, with Europe victorious on the past three occasions.

Victory was sealed when Ryan Moore beat Lee Westwood, one of Clarke's wildcards who did not win a point.

"Hindsight is a wonderful thing but even with that we wouldn't have made any changes," Clarke told BBC Sport.

"I have spoken about this already to my vice-captains and we were confident."

Needing 14 points to retain the trophy, Europe trailed 9½-6½ heading into the final-day singles and Clarke put his best players out first, hoping they would erase the deficit and those playing later would continue the momentum.

However, US skipper Davis Love guessed Clarke's tactics, and Patrick Reed, the number one US player, beat Rory McIlroy on the 18th hole.

Henrik Stenson and the impressive Thomas Pieters, who won three points when paired with McIlroy on Friday and Saturday, both won as Europe closed to within a point.

But the US emerged comfortable winners thanks to victories in five of the last six matches in front of a partisan crowd in Minnesota.

"A putt missed here or a putt holed outside your opponent, that makes all the difference," said Clarke.

"Unfortunately for us we didn't quite hole them and the Americans did."

Love said a "shift in attitude" helped the US win the biennial tournament for the first time since 2008.

In the build-up to the event, both he and veteran Phil Mickelson talked about adopting the European approach of keeping past players, vice-captains and captains involved.

"We came here ready to go. It started in March with Jack Nicklaus telling us to be prepared and throughout with Tiger Woods telling us the strategy.

"It was a new system and the picks were confusing, but everything else we were prepared for.

"It was a new chapter over the last two years and the biggest thing is not really the win, but that we are all pulling in the same direction together.

"We are going in a great direction. The veteran players have showed them what we want them to do for the next 20 years."

Mickelson agreed that the work put in for this tournament would help for the long-term future of the US team.

"We need to build on this," he said. "Otherwise, it's all for naught. We created a very solid foundation this year. Yes, it's great that we had success this week, but it's not about one year or one Ryder Cup. It's about a multitude, for decades to come."

Meanwhile, Justin Rose has criticised the course at Hazeltine, claiming bad play was not punished severely enough during Sunday's singles.

"I thought the set-up was incredibly weak," said the Englishman. "It was very much a pro-am feel in terms of the pin placements. They were all middle of the green.

"We are world-class players here and we want to showcase our skills - we want to be tested. For example, the water holes out there, all the pins were as far away from the water as possible.

"The pin on 17 is an absolute a joke. It's a nine iron into the middle of the green. With a match on the line, you want a player to step up a little bit more than they have to.

"Even 18, if you hit a good drive down there, you've got a wedge into the green - and if you hit a wedge to the middle of the green, you're within 12 feet of the pin.

"I just felt coming down the stretch it was a little soft." 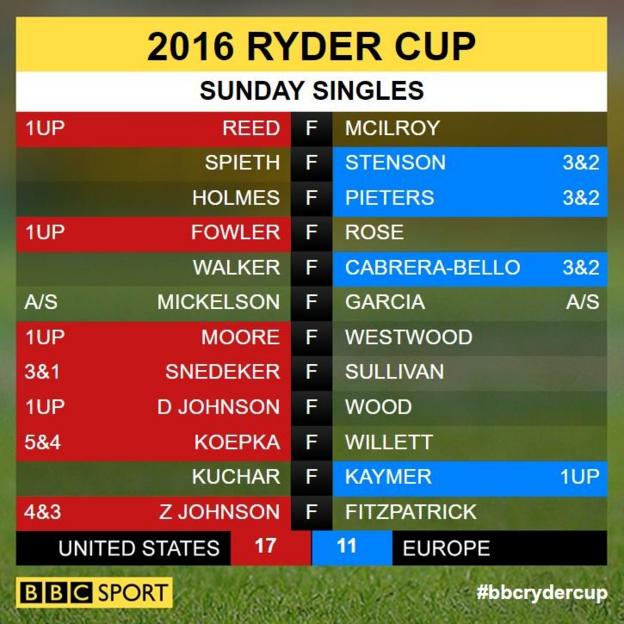