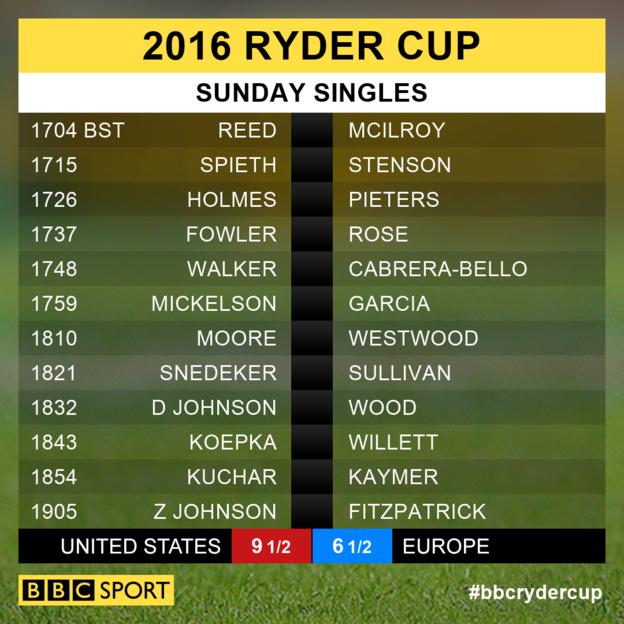 Rory McIlroy will take on Patrick Reed in Sunday's opening singles match at the Ryder Cup as Europe look to fight back from 9½-6½ down at Hazeltine.

The Belgian will play American JB Holmes, while Jordan Spieth, who has partnered Reed to three points, faces Henrik Stenson in the second match.

Europe need to reach 14 points to retain the trophy, while the US team needs to score 14½ points to win for the first time since 2008.

Europe captain Darren Clarke has put his best players at the top of the order in an effort to overturn the three-point deficit but his selections have been matched by opposite number Davis Love.

"I've obviously been around a lot of teams so it was no secret that they (Europe) were going to load the boat," said Love.

"So our problem was we say, 'alright, we're going to put the six guys out that are playing really well.'"

The opening match will pit two of the leading figures from the opening two days against one another in McIlroy and Reed.

McIlroy was fired up in the face of some hostile crowd reaction on Saturday but his captain has no doubt the world number three will cope with the pressure on Sunday.

"He's playing some of the best golf of his life right now," said Clarke. "I know for a fact that he can't wait to get on that tee. I have no worries about Rory."

Reed is also confident that the atmosphere will bring out the best in him, saying: "I was made for this kind of stuff.

"Any time I can get in front of the crowd, and especially the Americans, and have the red, white and blue on, it just fuels me. For some reason, getting that hyped up, it doesn't really affect me."

Clarke and his team are looking to the 'Miracle at Medinah' of four years ago for inspiration, when Europe recovered from 10-6 behind to win.

"We have a chance," said Clarke. "The guys are capable of doing it. There is a precedent."