Sergio Garcia and Rafa Cabrera-Bello staged a remarkable comeback as Europe further cut America's lead to 6½-5½ on the second morning at the Ryder Cup.

Four down with six to play against Jordan Spieth and Patrick Reed, the Spaniards claimed a valuable half.

Brandt Snedeker and Brooks Koepka gave the US their only victory. 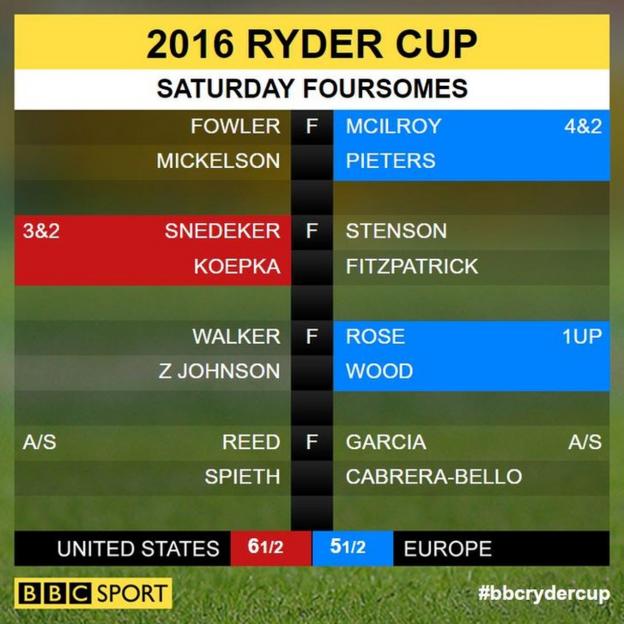 It was another successful session for Europe, continuing a fightback from a 4-0 Friday morning whitewash that began with three wins in the following fourballs.

The icing came from Spanish pair Garcia and Cabrera-Bello, their half all the more valuable after Spieth and Reed's victory seemed guaranteed for so long.

In claiming a half, they ensured the American lead is one point, rather than two, as Europe look to claim a fourth successive Ryder Cup.

The damage they have inflicted on the previously highly impressive Spieth and Reed may only be revealed when the Americans once again team up to take on Rose and Henrik Stenson in the Saturday's final fourballs contest - the third time those two pairs have met in two days.

McIlroy and Pieters, who have delivered two points from their two matches together, meet world number two Dustin Johnson and Koepka.

Danny Willett and Lee Westwood, who did not play on Saturday morning, face JB Holmes and Ryan Moore, while Garcia and Martin Kaymer reprise their partnership to face Phil Mickelson and Matt Kuchar.

For so long in the Minnesota sunshine it looked as though Spieth and Reed, beaten only once in five Ryder Cup contests as a pair, would deliver an American point.

As Spieth putted with perfection, the US were two up after three, and four ahead with six remaining.

However, it was at this point they began to wilt - American bogeys on 13 and 15, along with a European birdie on 16 cut the deficit to one with two to play.

On the par-three 17th, Cabrera-Bello holed a birdie putt from the fringe to square the match, right after Spieth saw his own 30-foot birdie chance finish millimetres short.

Amid great tension, and with the noisy, partisan home crowd reduced to silence, Garcia and Reed had to hole from within five feet on the last.

The pressure was ultimately on Garcia, who completed a half that felt like a European victory.

By this time, the European team had already continued to rally for captain Darren Clarke.

World number three McIlroy and rookie Pieters took advantage of some erratic early play by Mickelson and Rickie Fowler to open up a three-hole lead, one they did not surrender despite a wobble around the turn.

In order to shepherd rookies Wood and Matt Fitzpatrick, neither of whom played on Friday, Clarke opted to separate the regular pair of Rose and Stenson.

It galvanised Rose, who was below his best on day one but made a birdie putt on seven and a brilliant approach to set up a birdie on 10 on the way to giving Europe a three-hole lead.

Jimmy Walker and Zach Johnson chipped away, with Rose and Wood forced to halve the last for a one-hole win.

In contrast, Open champion Stenson, so impressive on the second afternoon, was often relying on 22-year-old Fitzpatrick, whose putt on the seventh and chip on the 11th clawed back a two-hole deficit against Snedeker and Koepka.

However, when Snedeker and Koepka holed on the 13th and 15th respectively, Europe could no longer cling on, the US sealing a 3&2 win with four successive birdies.

'It was massive to have that heart' - what they said

European captain Darren Clarke speaking to Sky Sports about Garcia and Cabrera-Bello's win: "It was huge, massive to have that heart. They two guys are just bouncing, but they worked hard. Every other pairing will be trying to do the same thing, to push it that bit further for the team was fantastic."

USA captain Davis Love: "It hurt. That was half a point we'd like to have. Sergio made a bunch of putts coming in so you have to give him credit."

Europe's Sergio Garcia on Sky Sports: "This is the Ryder Cup, it's as simple as that. It was tough out there - they played so well. We were consistent giving ourselves chances but they had an amazing start. We kept saying, 'keep at it and they may slow down'."

Europe's Rafa Cabrera-Bello: "We didn't feel we had many options at the beginning; they were just cruising. We had to tell ourselves they would slow down. We saw a window of opportunity, played good and managed to snatch a tie."

Europe's Rory McIlroy on BBC Radio 5 live: "You want to set the tone for the rest of the team and when they saw us up early that's exactly what we were trying to do - put blue on the board. We delivered for Darren. It's a great atmosphere and it seems like we're playing it in the right spirit. It's competitive but still respectful."

"It is all to play for. It is amazing these things boil down to a single hole. This is where Europe have traditionally in recent Ryder Cups been so strong. This is pivotal to the outcome of the Ryder Cup."

We've launched a BBC Sport newsletter, bringing all the best stories, features and video right to your inbox. You can sign up here.