Henrik Stenson and Justin Rose will partner rookies in Saturday's foursomes as Europe begins day two of the Ryder Cup 5-3 behind the United States.

Stenson will play with Matt Fitzpatrick against Brandt Snedeker and Brooks Koepka while Rose partners Chris Wood against Jimmy Walker and Zach Johnson.

Europe lost the opening four matches on Friday and captain Darren Clarke has switched both his pairings and the order for Saturday's foursomes in the hope of avoiding another whitewash.

"It is definitely something we need to address if we can," said McIlroy.

"If we want to ride this little wave of momentum that we have we obviously need to address it.

"We're not going down without a fight. It was four-zip after the morning. We've pulled it back a good bit and we plan to pull it back even further."

Stenson and Rose played together twice on Friday at Hazeltine, and their defeat in the opening foursomes match to Reed and Spieth was their first as a Ryder Cup pairing.

However, they exacted revenge in the fourballs to hand the Americans their first ever loss.

McIlroy, who lost to Mickelson and Fowler in Friday's foursomes when paired with Andy Sullivan, also has the chance to avenge that defeat. The Northern Irishman is again paired with Pieters after they convincingly won their fourball match 3&2.

Clarke has also opted to keep Garcia and Cabrera-Bello together after their similarly dominant 3&2 fourball victory on Friday.

American captain Davis Love keeps faith with three of the foursomes pairings that dominated the opening session. The only change is Snedeker and Koepka, who won their fourball match, coming in for Dustin Johnson and Matt Kuchar.

The US won Friday's foursomes 4-0 but Europe hit back in the fourballs, winning that session 3-1. 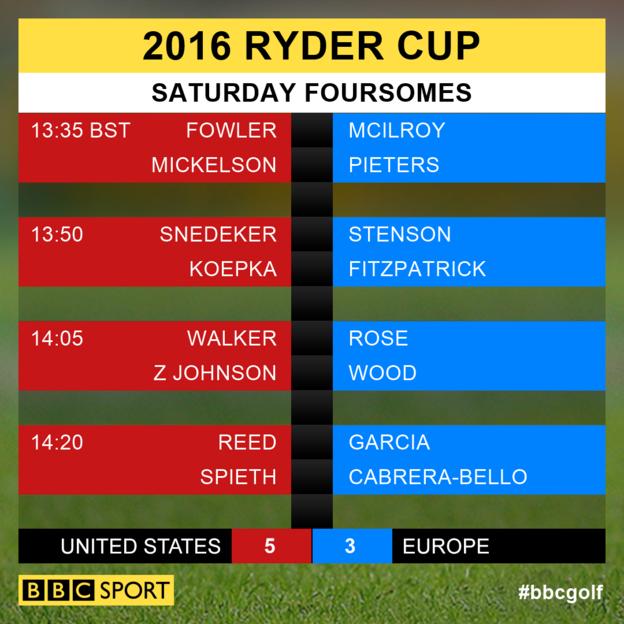