Europe fought back from a 4-0 foursomes whitewash to cut the USA's lead to 5-3 after day one of the Ryder Cup.

In the afternoon fourballs, Henrik Stenson and Justin Rose won 5&4 against Jordan Spieth and Patrick Reed.

But Brooks Koepka and Brandt Snedeker won 5&4 against Danny Willet and Martin Kaymer to ensure the US remain ahead.

"I would definitely say it's better to have a small deficit with some momentum because we didn't have much at lunchtime," said Europe captain Darren Clarke.

"The guys went back out there and they showed just why I'm so proud of them. They showed a massive amount of desire and the fight in them to get themselves right back into it again."

US captain Davis Love said: "Obviously I'm happy to be 5-3. I like being ahead but I keep telling our guys there's eight points a day and then there's 12 points on Sunday." 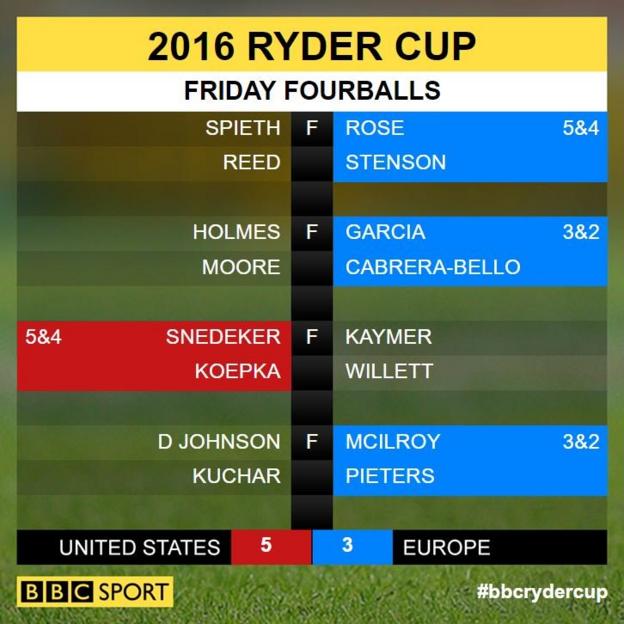 After failing to win a point in a session for the first time since 1981, Europe improved dramatically - especially on the greens - to ensure their quest for a fourth successive Ryder Cup was not effectively ended in just one day at Hazeltine.

Still, the hosts hold a healthy advantage as they look to win the event for only the third time in 23 years, though it will not be lost on visiting captain Darren Clarke that Europe trailed 5-3 after the first day of their remarkable comeback win at Medinah four years ago.

Both the 3-1 scoreline and margin of European victories in the fourballs not only quelled the rowdy home crowd, but also reversed the momentum of the 41st Ryder Cup, leaving the contest delicately poised for Saturday morning's foursomes.

Stenson and Cabrera-Bello lead the charge

Stenson and Rose trailed Spieth and Reed for almost all of the morning foursomes and looked set for a long afternoon in the Minnesota sunshine as the Americans began with more electric putting.

But after the US putters finally failed on the fourth, Sweden's Open champion Stenson dragged his team along, making birdie on the seventh when Rose went in the water, then knocking his tee shot on the eighth to gimme range.

Though Rose was below his best, Spieth and Reed became erratic after falling behind for the first time in 25 holes, their first Ryder Cup defeat as a pair engineered by the imperious Stenson.

If the European turnaround was sparked by their most experienced pair, it was continued by Spanish rookie Cabrera-Bello, who was relaxed enough to be seen encouraging his vastly experienced compatriot Garcia on the way to the first tee.

Cabrera-Bello, who sat out the morning, promptly birdied the first then, after a Garcia birdie for two up, put his team another hole to the good with a par on the seventh despite finding water off the tee.

Garcia faded in the morning session but found life in his putter in the afternoon - and though Holmes cut the lead from four to two, victory was sealed on the 16th.

A tale of two rookies

Belgian Pieters improved throughout the morning, despite being on the end of a heavy defeat in partnership with England's Lee Westwood.

Paired with Europe's leading player McIlroy in the afternoon, he found a team-mate to share the load, with two birdies each giving the visitors four successive holes on the front nine.

Pieters drained an 18-foot putt on the 13th to draw a roar from McIlroy, before a birdie each from Johnson and Kuchar cut the lead to two.

But, with American momentum growing, McIlroy produced a wonderful approach to reach the par-five 16th in two, then bowed to the crowd as he holed the eagle putt that completed the win.

If Pieters benefitted from his more experienced partner, fellow rookie Willett - lightly booed on the first tee after the controversy caused by a magazine article written by his brother - was let down by two-time major winner Kaymer.

Not once on the front nine did the German provide the better ball for his team, who were subsequently overrun by big-hitting American debutant Koepka and the precise-putting Snedeker.

'The golf was scintillating' - what they said

Europe captain Darren Clarke on Sky Sports: "I'm massively proud of them. They were bitterly disappointed at lunchtime but the guys came out this afternoon and the golf was scintillating."

United States captain Davis Love: "You know it's going to be a close match. We had a great morning, they had a great afternoon. We shot low scores, just got beat by a team playing unbelievable golf. We need to start over again tomorrow. It's another day and we try to win every session."

Europe's Rory McIlroy on BBC Radio 5 live: "The consensus at lunch was we have to chip away at the lead. I don't think we could have dreamed it any better this afternoon and we are probably going into our locker room a little bit happier than they are this afternoon."

Europe vice-captain Ian Poulter: "The team was pretty low at lunchtime. It's been a long time since it's been 4-0 in a morning session, but the guys dug deep. That morning session was painful, but the afternoon was incredible. We can hear our crowd now."

It was a dramatic opening day in a competition that specialises in the sort of see-saw excitement that few other sporting events can match. At midday the course was a sea of Stars and Stripes,

McIlroy and Sullivan's foursomes defeat on the 18th to Mickelson and Fowler, having been two up with four to play, was perhaps the most chastening European moment of all.

Yet in the afternoon the vast galleries were silenced by a European charge that brought back stirring memories of Medinah four years ago, and nothing epitomised that better then McIlroy's eagle putt on the 16th to see off Johnson and Kuchar with the impressive Pieters. The contest is wide awake and wide open.