The United States whitewashed Europe in the opening foursomes to take a 4-0 lead on the first day of the Ryder Cup.

Jordan Spieth and Patrick Reed set the tone by beating Justin Rose and Henrik Stenson 3&2 in the top match.

Sergio Garcia and Martin Kaymer lost 4&2 to Zach Johnson, while Lee Westwood and Thomas Pieters were thrashed 5&4 by Dustin Johnson and Matt Kuchar.

Phil Mickelson and Rickie Fowler beat Rory McIlroy and Andy Sullivan one up to seal the first US sweep since 1981. 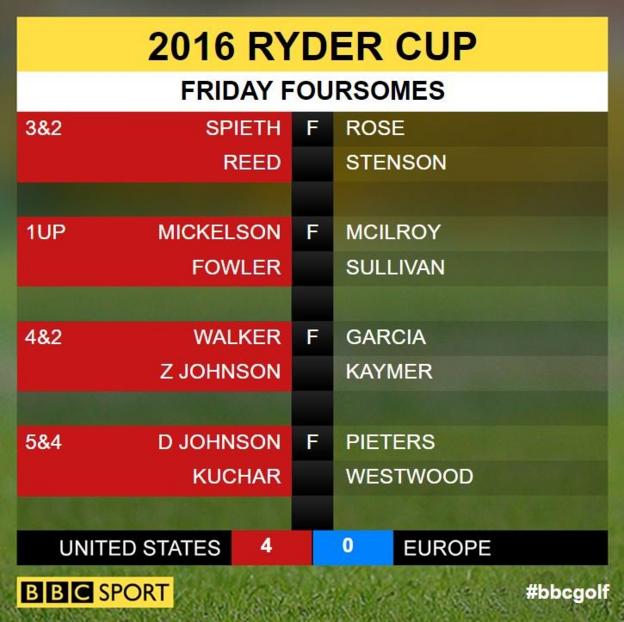 Europe left with mountain to climb

Europe have not been ahead after a first session since 2006, in which time they have won three of the four Ryder Cups.

But the scale of the US domination on the opening morning means Darren Clarke's team already have to pull off an incredible turnaround, even with 24 points still on offer, to defend the trophy and seal fourth successive triumph.

Spieth and Reed will renew their battle with Rose and Stenson in the first of the afternoon fourballs, while Garcia will partner fellow Spaniard Rafael Cabrera-Bello against JB Holmes and Ryan Moore.

Brandt Snedeker and Brooks Koepka will play Kaymer and Danny Willett, with Dustin Johnson and Kuchar again teaming to meet McIlroy and Pieters.

All 12 of the US team will have played on the opening day, but Europe's two English rookies, Matt Fitzpatrick and Chris Wood, must wait.

The match of Spieth and Reed against Rose and Stenson - two teams that were unbeaten two years ago - was not only top of the card, but the most eagerly anticipated on a chilly, misty morning in Minnesota.

As players from both sides in all four matches struggled in a session of varying quality, Spieth holed two birdie putts in the first three holes to give his pair a lead they would not relinquish.

Though he would later admonish himself for his work off tee, Europe's putting - particularly that of Rose - meant chances to get back in the match went begging, with the US sealing their first point on the 16th.

Soon after, Johnson and Kuchar completed a one-sided win over an out-of-sorts Westwood and nervous-looking rookie Pieters.

The Belgian pulled his approach to the first, Westwood missed from three feet on the second and found water on the seventh to leave Europe three down.

At one point, the American pair were five up despite making only two birdies, and Europe never recovered.

While Europe were never ahead in the first and fourth matches, they led with seven holes to play in the second and third.

Four-time major winner McIlroy, partnering English rookie Sullivan, was involved in a back-and-forth contest with Mickelson and Fowler, recovering from a shaky front nine to hole the putts that had Europe two up with four to play.

But after a European bogey on 15, McIlroy lipped out with a par putt on 16 and Sullivan found water off the tee on 17, with Europe unable to salvage a half on the 18th.

Meanwhile, a tight contest pitting Zach Johnson and Walker against Garcia and Kaymer swung in favour of the hosts courtesy of an astonishing run of five successive hole wins.

Garcia had played his part in Europe holding a one-hole lead until the 12th, but the Spaniard gradually left Kaymer with more and more to do.

"Darren Clarke has gone with experience this afternoon - he has to.

"It has been an awful start. There is so much momentum and feeling on the golf course for the USA right now. It is going to take a monumental effort this afternoon.

"Europe have to win this next session. Being 5-3 down would be something of a triumph."

Europe captain Darren Clarke on Sky Sports: "They didn't fire on all cylinders. They have been playing nicely in practice. It's one of those things - foursomes is difficult. We thought we were looking strong, but they played better than we did - 4-0 is probably a fair result.

Europe's Sergio Garcia: "It is a massive crowd. They are very excited and they should be, but it is our job to quieten them down a little bit and hopefully we can do that this afternoon."

Europe's Lee Westwood: "I will take responsibility. I played poorly and Thomas played well. He made some putts when we needed to. You try to put a bit of pressure on, you don't want to be giving holes away. I hit a couple of wild drives early on and you cant afford to do that. It's a tough game to play and you want to get momentum."

USA's Jordan Spieth: "We are very pleased we got off to such a hot start. We held it together. Patrick saved me with some putts coming in and that was a lot of fun to be part of that match."

USA's Patrick Reed on holing his winning putt: "I live for those kind of moments. Knowing I had the whole crowd behind me and that they'd go nuts if I made it. I knew there was no way I was going to miss it. It was just an awesome feeling."