The pair, who won the first point as Europe won at Gleneagles in 2014, tee off at 13:35 BST against Jordan Spieth and Patrick Reed.

The three-day event at Hazeltine National in Minnesota begins with the alternate shot foursomes and four fourball matches will follow, with the pairings to be announced on Friday.

Saturday sees the foursomes and fourballs reversed before the contest is decided with all 12 players going head-to-head in singles matches.

Englishman Rose and Stenson of Sweden, who won gold and silver respectively at the Rio Olympics in August, claimed three points as a pair two years ago, including their opening fourball match to set Europe on the way to a 16½-11½ victory.

However, Spieth and Reed also went unbeaten last time out in Scotland, winning two fourballs and halving their only foursomes match.

At Gleneagles, the foursomes were played after the fourballs and Europe won that format by a combined score of 7-1.

European captain Darren Clarke has picked six rookies in his squad and England's Sullivan will be the first to play, going out second with Northern Ireland's McIlroy.

They face Mickelson and Fowler who have played together just once before at the Ryder Cup, losing a fourball match in 2010.

The only other rookie in the opening session is Belgian Pieters. He will play with Westwood, who is making his 10th appearance and is the most experienced member of the team.

Clarke defended his decision not to play a third rookie in Masters champion Danny Willett, who has spent the past couple of days apologising for an "ill-timed and wrong" article written by his brother.

When asked if he had intended to play Willett with Westwood in Friday's foursomes, Clarke replied: "No."

He added: "Danny will be playing in the afternoon (fourballs). He is fine and is disappointed like all the guys not playing, but he understands what I am trying to do is for the team.

"Danny may well play four times, the last being his Sunday singles match."

Clarke also said that all his rookies "will play before the singles", however he added that the state of the match would dictate if they all played on Friday. 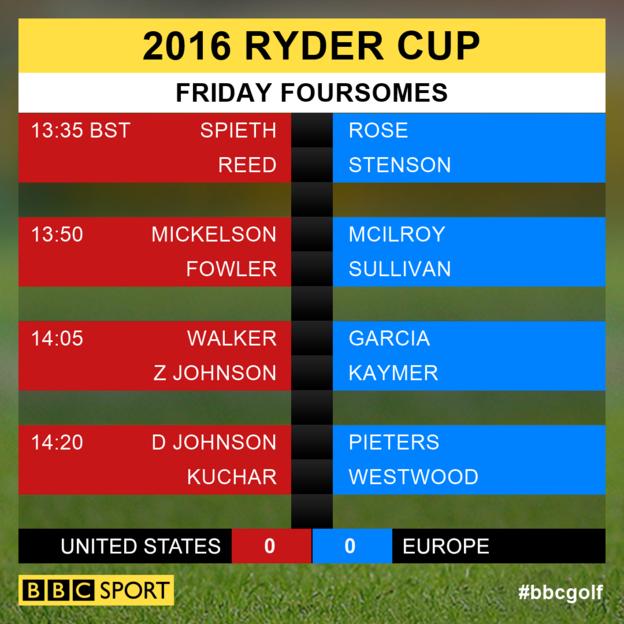