Jordan Spieth equalled the lowest winning score in Masters history to cap a record-breaking display at Augusta and win his first major.

The 21-year-old American, second on his debut last year, shot a two-under 70 to triumph on 18 under.

England's Justin Rose hit 70 to finish 14 under, joint second with three-time champion Phil Mickelson (69) who ended runner-up in a major for the 10th time.

World number one Rory McIlroy finished fourth on 12 under after a 66.

The story going into the Masters had been all about the Northern Irishman's quest to become just the sixth man to win the Grand Slam of all four of golf's majors.

But it was Spieth, the new world number two, who dominated the headlines on each day, equalling Tiger Woods's winning score of 18 under in 1997, when the former world number one won his first Green Jacket.

Spieth also became the second-youngest Masters champion, winning the tournament at the age of 21 years and 259 days, 155 days older than Woods when he recorded his 1997 win.

He also became the first player in 39 years to lead a Masters from start to finish, and the first to shoot 28 birdies at the tournament.

A one-over 73 for Woods meant he finished tied 17th on five under, while 2014 champion Bubba Watson carded a 74 to finish tied for 38th on one over.

Rose close, but not close enough

Rose can consider himself unlucky not to have come even closer to winning his first Green Jacket, with 14 under good enough to have won 12 of the last 13 Masters, but such was Spieth's dominance from the very first round it was hard for anyone to get close.

The Texan caught the eye immediately with an opening eight-under 64 and followed that up with a 66 on Friday for a two-day total of 14 under, breaking a 39-year-old record for the lowest halfway score in Masters history.

A late wobble on Saturday - when he double-bogeyed the 17th - gave the chasing pack hope, with Rose making the biggest move to cut Spieth's lead to four under going into Sunday's final round.

Rose looked to apply immediate pressure as he putted for birdie on the first, but playing partner Spieth kept his cool to respond with a birdie of his own and maintain his advantage.

It was an electrifying start, and one that continued when Rose sank a birdie putt on the second but Spieth did likewise one hole later. 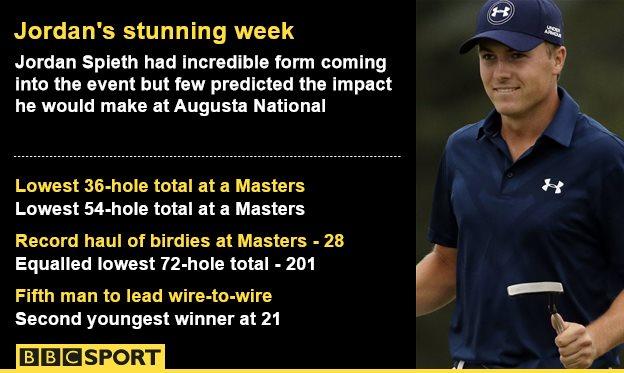 Rose saved an excellent par on the fourth, but it was clear that he could not afford any mistakes and ultimately bogeys on the par-three sixth and par-four ninth cost him the chance to truly challenge Spieth.

Instead, the American effectively put the tournament beyond his rivals around the turn, sinking birdie putts on the eighth and 10th to open up a six-shot lead.

Rose had rallied late on in the third round, making birdies in five of his final six holes, and he again found form from the 13th, picking up three successive shots to close the gap to four.

Spieth, though, responded with a birdie on the 15th that made him the first player in Masters history to reach 19 under par.

Had he held that until the finish, it would have set a new Masters record for the lowest winning score and equalled Woods's record for any major, set at the 2000 Open, but a bogey on the last denied him both honours.

They both started the day tied for fifth, but 10 strokes behind Spieth, meaning something extraordinary would need to happen to see either of the two challenge for victory.

Woods's cause was not helped when he injured his hand on the ninth, appearing to strike a hidden tree root when hitting the ball out of the pines, but he recovered to sink an eagle on the 13th, prompting a huge cheer from the galleries.

Spieth's stunning form and a slow start for McIlroy meant he rarely looked like challenging for a third consecutive major win, but can at least be happy with his performance during the weekend.

Having flirted with missing the cut on Friday, McIlroy improved with a 68 on Saturday and was even better on Sunday, carding six birdies without dropping a shot for his best-ever Masters result.

Poulter rises, but not enough

England's Ian Poulter capped a fine weekend performance with six birdies and just one bogey for a five-under 67 and a tie for sixth, alongside compatriot Paul Casey (68) and American Dustin Johnson (69) on nine under.

Jamie Donaldson of Wales produced a superb final round, carding five birdies in his final six holes for a five-under 67 to finish in a share of 33rd place on level par.

England's Danny Willett, on his Masters debut, shot his third one-under 71 of the week to finish on one over for the tournament, while a two-over 74 meant compatriot Lee Westwood finished in a share of 46th place on two over.

Finally, a level-par 72 for Northern Ireland's Darren Clarke saw the European Ryder Cup captain finish on six over and tied for 52nd alongside compatriot Graeme McDowell (73).