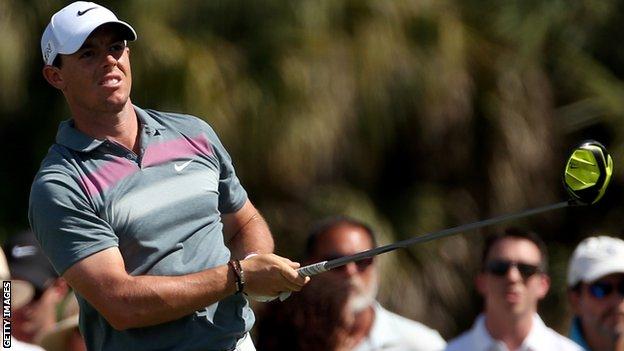 World number one Rory McIlroy threw one of his clubs into a lake during his second round of the WGC-Cadillac Championship in Miami.

The Northern Irishman had just pulled his approach shot into the water on the par-five eighth hole - and sent his long iron after it in frustration.

McIlroy, 25, carded a two-under 70 to lie one under for the tournament.

That leaves him eight shots adrift of leader JB Holmes, who shot a one-over 73 to add to his opening-round 62.

McIlroy's missed cut at last week's Honda Classic was his first since June 2014. He described it as a "kick in the backside".

Speaking at the end of Friday's round, he said he should not have thrown his club into the water.

McIlroy said: "It felt good at the time but now I regret it. Frustration got the better of me.

He told Sky Sports: "Following on from last week, I feel like it's very close and to hit shots like that you get frustrated, but I shouldn't have done what I did."

American Holmes found the water four times and carded a double bogey on the final hole of his second round.

Countryman Ryan Moore is two shots adrift of Holmes after a second-round 71, while Australian Adam Scott another stroke behind.