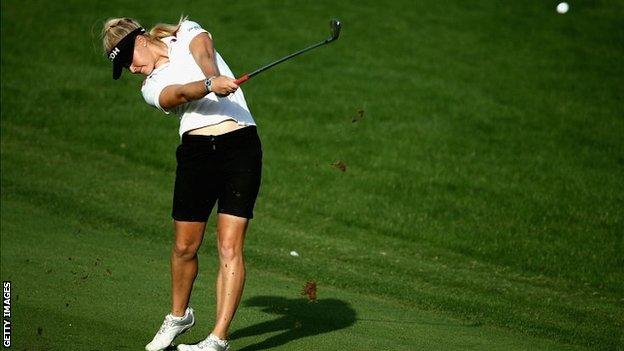 England's Charley Hull has become the youngest winner of the European Order of Merit after finishing tied for fifth at the Dubai Ladies Masters.

The 18-year-old went into the final event of the season with a lead of £18,000 over Gwladys Nocera, and the French player could only tie for 11th.

The Chinese player closed with a 70 that left her on 19 under par.

Spaniard Carlota Ciganda finished five shots behind in second, one shot clear of Caroline Masson of Germany in third.

Hull, from Kettering, was joined by compatriots Liz Young and Melissa Reid on 10 under, while Amy Boulden of Wales finished 24th to claim the Rookie of the Year award.

Twelve months ago it was Hull who won the rookie prize, and a meteoric rise has now seen her top the overall money list within a year.

"I think I wanted to do that because you only get one chance," said Hull. "I'm happy.

"Gwladys is a good player. Just on the back nine today, I thought 'don't make any silly mistakes.' I double bogeyed the first but got two birdies on the bounce back, so pretty happy with myself there."

Hull was in contention after three rounds of the Women's British Open in August but closed with a 78, and is looking to add a major title to her triumphs in 2015.

"I'll just try to win a tournament each week - that would be brilliant," she said.

"But Majors are something special, especially this year, coming close to my home tournament, I didn't finish off on the last day.

"I think my putting let me down but now I've got that sussed."