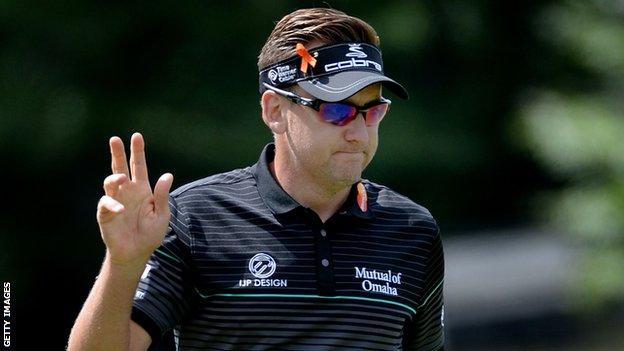 Ian Poulter insists his mind is not on the Ryder Cup after shooting a promising 67 in the opening round of the Deutsche Bank Championship.

The Englishman is expected to be a wildcard pick for European captain Paul McGinley thanks to his previous success in the competition.

He said: "I can't do anything about Ryder Cup. It's someone else's job."

Rory McIlroy, who is hoping to finish top of the FedEx Cup standings, shot a 70 on the opening day.

Poulter is four shots behind the leader, Ryan Palmer, in Boston.

This week's Deutsche Bank event finishes on Monday, meaning it does not count towards Ryder Cup qualification for European players, for whom the deadline is Sunday.

But Poulter and Luke Donald are outside the top-nine automatic qualification positions and both will therefore be trying to impress.

Poulter added: "I am solely focused on being ruthless on this week, that's it. I want to turn around my year."

Former world number one Donald shot a 69 on Friday and said of his Ryder Cup hopes: "I haven't played very well lately but I still feel like I could be a valuable part of that team.

"Obviously I have a lot of experience and hopefully that's going to count for a lot. Hopefully I'm on the inside looking out."

Lee Westwood must also rely on a wildcard but is not playing this week after failing to qualify, while Northern Ireland's Graeme McDowell, who occupies the final automatic spot, is also absent after the birth of his first child.

McIlroy is already assured of his place at the Ryder Cup as the leading European golfer and his more immediate target this weekend is to knock Hunter Mahan from the top of the FedEx Cup standings.

The world number one is targeting a fourth win in five events to regain his lead in the PGA Tour play-offs but signed for a scrappy round on Friday to sit seven shots off the pace.

"The scoring conditions aren't quite as favourable as they have been in the past," said McIlroy.

"It was tricky out there. The wind was up. The greens are firmer than they ever have been since I've been coming here."