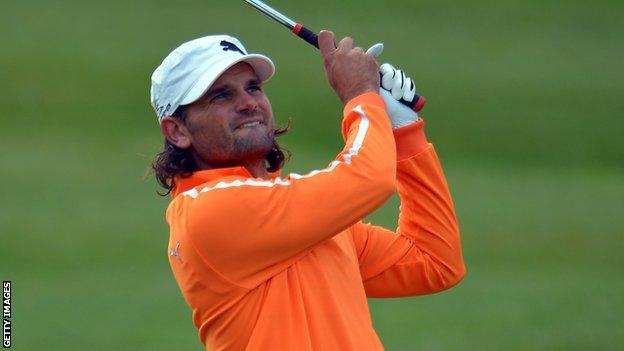 Edfors will be joined at Galgorm Castle near Ballymena by 2003 Dutch Open champion Maarten Lafeber.

Price, who beat Phil Mickelson in the singles at the Belfry, won the 2003 European Open title at the K Club.

Edberg, who is currently 38th in the Challenge Tour rankings, finished in a share of 12th place at the Open Championship in 2007.

Edfors is also playing mainly on the Challenge circuit this season after losing his main Tour card last autumn.

The 38-year-old is not having the best of seasons with him currently 58th in the Challenge rankings.

In his stand-out season in 2006, Edfors started the year with a victory in the TCL Classic, a co-sanctioned event between the Asian and European Tours, before clinching summer victories at the British Masters and Scottish Open.

His performances in 2006 earned him a trip to Augusta in 2007 while Edfors's career also includes a share of 19th place at the 2011 US Open.

Galgorm Castle touring professional Michael Hoey will again be undertaking the role of tournament ambassador and will be hoping to contend this year after missing the cut last year.

"I would love to get into contention and give the crowds something to cheer about," said five-times European Tour winner Hoey.

Last year's event came shortly after Hoey's Russian Open victory and the Belfast man is optimistic that he will perform much better at the Ballymena course 12 months on.

"I will be much better rested and prepared this time and am looking forward to competing on home soil once more."