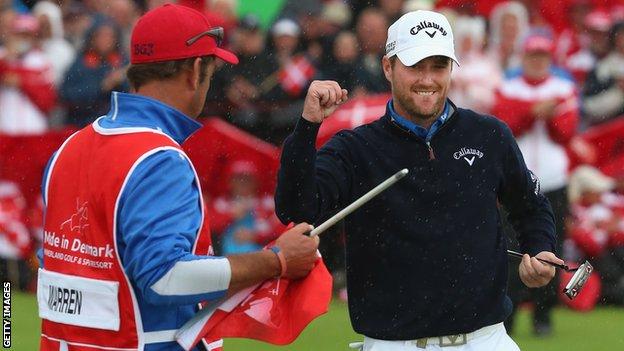 Marc Warren has ruled himself out of the reckoning for a Ryder Cup wild card despite claiming his first European Tour title for seven years.

Winning the inaugural Made In Denmark event on Sunday moved the Scot to 20th on the Race to Dubai and 23rd in the European Ryder Cup points list.

But he is not expecting a call from European captain Paul McGinley.

"That's not really in my thinking," he said. "I think that ship has sailed. I've left it a little bit too late."

Warren began the final day tied for the lead with Wales' Bradley Dredge, but the 33-year-old carded a closing 68 at Himmerland Golf Resort to win by two shots on nine under par.

The Scot last won a tournament in 2007 having suffered a number of near misses since his Johnnie Walker Championship victory, most notably squandering a three-shot lead with four holes to play in the Scottish Open in 2012.

"It feels incredible," Warren said. "I felt the last couple of years I've been close to winning a couple of times, but for whatever reason it hasn't quite happened for me, whether I've made mistakes or someone else has played really well.

"This summer, I felt more confident than I've ever done."

Warren had continued the form showed the previous week in finishing 15th in the US PGA Championship last week,

That Johnnie Walker Championship win came on the Centenary Course at Gleneagles, which hosts the biennial event at the end of September, but he still does not expect to make the Ryder Cup team.

"But I've been absolutely delighted with the summer I've had and I'm sure the team will be strong enough to get the job done without me," he said.

One player who can look forward to Gleneagles is home favourite Thomas Bjorn, who finished joint fourth and feels he has done enough to qualify for McGinlay's team with only two events remaining.

"I think I am there," said Bjorn. "I'm definitely taking next week off and will speak to Paul tonight or tomorrow and see what his thinking is.

"I'll take a good close look at the list, but at the moment I feel like I need a couple of weeks off and I feel I am pretty much there."