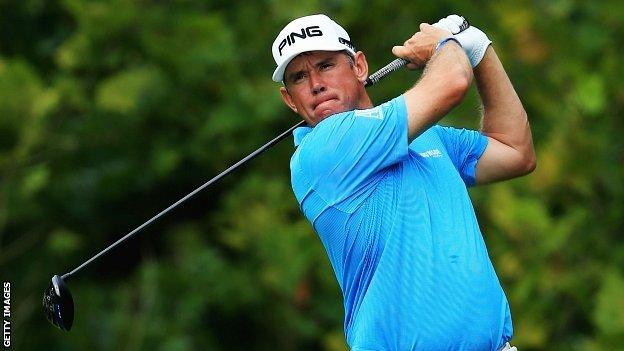 England's Lee Westwood is joint leader of the US PGA Championship after a six-under-par 65 on day one - a shot ahead of world number one Rory McIlroy.

Westwood, 41, is involved in a three-way share of the lead with Americans Kevin Chappell and Ryan Palmer.

However, four-time winner Tiger Woods struggled to a 74.

Northern Ireland's Open champion McIlroy finished with five birdies in seven holes and is in a tie for fourth with England's Chris Wood.

Defending champion Jason Dufner withdrew with a neck injury after playing his first 10 holes in eight over.

Having fired a final-round 63 in Ohio on Sunday, Westwood will now be confident of qualifying automatically for his ninth consecutive Ryder Cup, which takes place at Gleneagles next month.

And his joint lowest round in a major also put him in the frame for a first major title, having had several near-misses.

"I've played better rounds of golf but I was really pleased with today," said Westwood, who has been part of six winning European Ryder Cup squads.

"I've started to feel like my swing was coming around. That 63 obviously gave me some confidence coming into this week."

Nine players qualify automatically for European captain Paul McGinley's squad, with his three wildcard picks to be announced on 3 September.

McIlroy is chasing his fourth major title and his third tournament win in a row after victories at the Open at Hoylake and the WGC-Bridgestone Invitational last week.

The 25-year-old went out in three under par before a double-bogey at 10 and a bogey at 11 sent him tumbling down the leaderboard.

However, McIlroy demonstrated great powers of recovery, rattling off four straight birdies between 12 and 15 and just missing a long eagle putt at the last.

"I was really annoyed," McIlroy said of his second shot at 10, which he hooked out of bounds.

"It was actually a bit of a shock, it's the worst shot I have hit the last few weeks. It came out of the blue and knocked me off track but to come back the way I did was great.

"It could have been a couple better but if those last few putts had dropped but 66 is a solid start."

Bristol's Wood, the world number 90, did not drop a shot and made five birdies, having missed the cut in two of his three previous US PGA appearances.

Dufner's injury means he might miss out on the Ryder Cup. The 37-year-old, who made his debut for the USA in 2012, has been struggling with bulging discs since the Masters in April.

With Dustin Johnson taking a break from golf and fifth-ranked Matt Kuchar missing Valhalla with a back injury, US captain Tom Watson's problems are mounting.

Phil Mickelson, US PGA champion in 2005 and also hoping to nail down an automatic Ryder Cup spot, carded a 69 to finish four shots behind the early pacesetters.

Ian Poulter, who missed the cut at last month's Open Championship at Hoylake, opened up with an encouraging 68, the same as fellow Englishman Danny Willett and Ireland's Shane Lowry.

Wales' Jamie Donaldson birdied the last for a two-under 69, the same as American Rickie Fowler, joint runner-up at Hoylake and this year's US Open.

Australia's world number two Adam Scott got his campaign under way with a level-par 71, while Tom Watson carded a one-over-par 72.