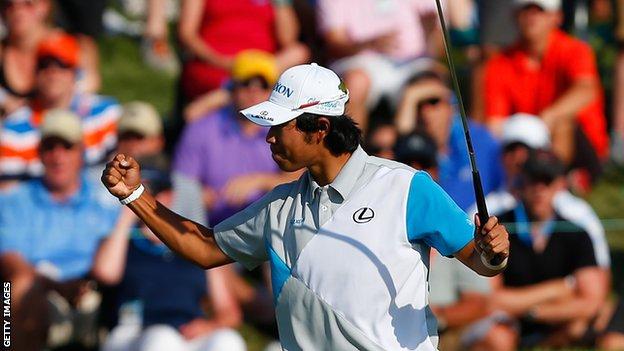 Japan's Hideki Matsuyama picked up his first win on the PGA Tour by beating Kevin Na in a play-off to take victory at the Memorial Tournament.

Na found the creek with his drive on the first play-off hole on the 18th.

Matsuyama's approach shot hit a spectator on the knee but he chipped on to the green and his par was enough to beat Na, who was on the green in four.

Overnight leader Bubba Watson missed the play-off by a shot with a final round of 72.

England's Paul Casey, who led at the halfway stage, finished six shots off the lead with Northern Ireland's Rory McIlroy a shot further back.

Needing a birdie on the final hole to move level with clubhouse leader Na, who carded a round of 64, Matsuyama broke his driver when he hit the ground with frustration after his tee shot.

But the 22-year-old managed to make a three on the 18th to finish with 69 and take the contest into extra holes.

His previous best finish in the United States was a share of third place in the Frys.com Open in October last year.

Watson's round fell apart when he dropped a shot on the 14th and his tee shot on the 15th flew out of bounds into a neighbouring garden leading to a double bogey.

He missed a birdie putt to pull level with the leading mark on the 17th and could not make the birdie he needed on the final hole.