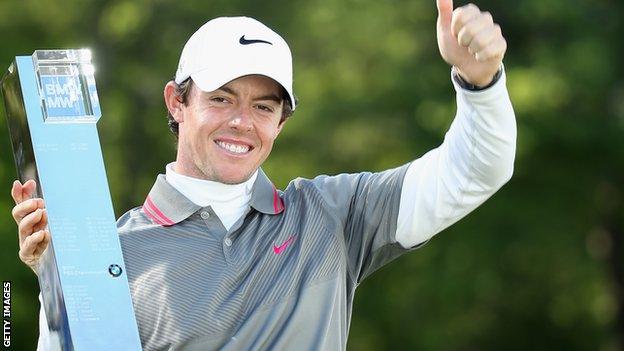 Rory McIlroy has targeted more major titles following Sunday's victory in the BMW PGA Championship, which lifted him to sixth in the world rankings.

After his win at Wentworth, the Northern Irishman said it felt as if his season was just beginning.

"I think this victory, against one of the best fields of the year, shows that I am on the right track again.

"Hopefully it won't be long before I am contending in majors and having a chance to win those again."

However, the 25-year-old confessed he knew little about Pinehurst, the venue for next month's US Open.

"I can only go on what I have read and heard about Pinehurst because I have never been there," said McIlroy.

"McIlroy's unlikely victory at the BMW PGA Championship was as compelling as anything he has achieved in his young career.

"He has stated his ambition to be the player who picks up the baton from Tiger Woods and this triumph could prove the catalyst.

"Remarkably it was the 25-year-old's first professional win on European soil. Few thought it possible in the wake of his emotional and painful split from fiancée Caroline Wozniacki."

"I hear it is going to be a long, long golf course which I am looking forward to."

McIlroy, who won his first major by eight shots in the US Open at Congressional in 2011, was a 16-year-old amateur when New Zealand's Michael Campbell won the last US Open staged at Pinehurst in 2005.

McIlroy's win at Wentworth came after a week that started with the announcement that he had called off his wedding to tennis star Caroline Wozniacki.

After turning off his phone and giving away his laptop, McIlroy sought sanctuary inside the ropes and pulled off a remarkable first professional victory on European soil with a closing round of 66.

"I think it is the start of something. I could feel my game sort of bubbling and it was getting there. A win validates that," said McIlroy.

"There are still three majors to play this year, a lot of golf left, a lot of big tournaments to try and win. So even though we're nearly halfway through the season, I feel like mine's just beginning."

McIlroy revealed he had spoken to Ryder Cup captain Paul McGinley before his third round at Wentworth, adding: "I was speaking to Paul, just talking about pairings and what he's thinking. It sounded like the way he was talking, even without this win, like I was going to be on the team.