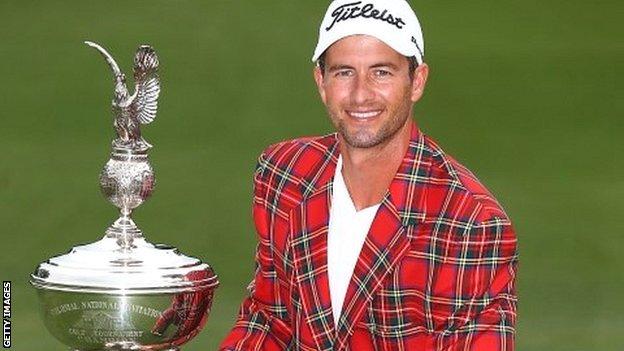 Adam Scott retained his place at the top of the world rankings as he beat Jason Dufner in a play-off to win the Crowne Plaza Invitational in Texas.

Scott, needing a top-13 finish to stay in the number one spot he took last week, carded a four-under-par 66 for a nine-under total to tie with Dufner.

The pair traded pars at the first play-off hole before a lengthy birdie putt from Scott extended the contest.

A second birdie for Australian Scott then brought the 33-year-old victory.

The 2013 Masters champion had been under pressure for the top spot from reigning European number one Henrik Stenson after the Swede finished tied seventh at Wentworth's PGA Championship.

"It's a new experience. It was certainly on my mind," Scott said about being number one. "I was having to speak about it a lot this week, leading up to teeing off - and maybe added a little pressure for myself, trying to play like a number one.

"But I think the important thing was I realised that it didn't mean playing perfect, and I certainly didn't play perfect all week. I made a few errors."

Dufner, who won last year's US PGA Championship, took the event at Forth Worth to a play-off after a 25-foot putt on the 72nd hole, but saw a 40-footer slide past the cup after the pair played the 18th again.

After birdies on the second play-off hole, Scott then showed the greater composure at the third by draining his putt from 14 feet for his 11th PGA Tour triumph and a career sweep of all four tournaments in Texas.

"The Texas Slam - that's a good slam to start with," he said. "I'll see if I can find some kind of other slam eventually in my career."

The victory means that Scott will be among the favourites when the US Open begins at Pinehurst, North Carolina on 12 June.