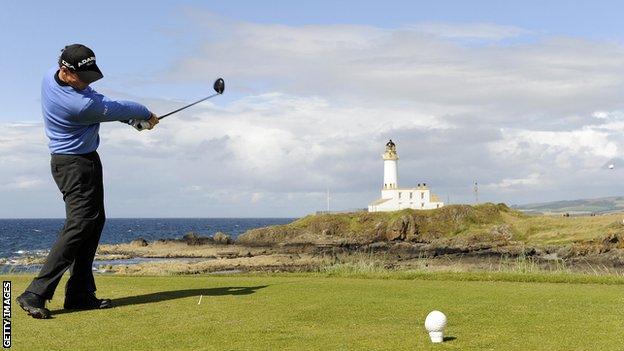 Some people in Scotland shuddered with fear at the news this week that Donald Trump, the retiring American billionaire, had bought the Turnberry golf resort in Ayrshire for an estimated £35 million.

Peter Dawson, the R&A chief executive, whose organisation takes the Open Championship to Turnberry on a rota basis, immediately proclaimed calming words on the latest acquisition by the insatiable Trump, though others feared a degree of 'Trump chintz' being foisted upon the famous hotel.

Such apprehension was probably unfounded and unfair. Trump is many things but when it comes to golf he appears both passionate and committed. His infamous Trump Links near Aberdeen, amid all its other controversies, is a magnificent golf course, built in true links style and by an architect, Martin Hawtree, whose appointment by Trump revealed a sense of the history and ethos of the game.

Jokes about Trump tearing down the iconic Turnberry lighthouse on the Ailsa course and replacing it either with a statue of himself, or something even tackier, have been amusing to read but are surely wide of the mark. Trump knows what Turnberry means in the world of golf.

In one sense - and maybe we shouldn't mind this - Trump's ego remains as rampant as ever. He has just landed yet another 'trophy hotel' and this, surely, has been the root of his purchase.

Leisurecorp, the company from whom Trump bought Turnberry, presumably had to be more concerned about profit margins at the resort than Trump will ever be. He simply wants to have this bauble among the world's great resorts in his collection.

On top of this, Trump's purchase may actually provide financial uplift for that part of Scotland, including nearby Prestwick airport, depending how hard Trump drives the Turnberry brand and attracts people to his golf course.

It's a strange one: within Scotland, in one way, Turnberry can be quite a pain to get to, with its ever-narrowing road as you wend your way down that Ayrshire coastline. But once you are there, my goodness, you are in a piece of golfing heaven to match anywhere in the world.

The challenge for Trump is to give Turnberry an ongoing cachet and visibility to the world, whilst preserving its historic values. He might just do that.

"Turnberry is a great favourite among the players and it's on the Open rota for sure," said the R&A chief executive.

"Donald Trump is investing in golf properties in Great Britain and Ireland, so he must have great faith in the future of the game, which is very heartening from a businessman of his stature.

"I'm quite sure, if he does buy Turnberry, he will be putting a lot of investment in."

Trump in turn has doffed his cap to the R&A, happily playing the role of supplicant to one of world sport's most enduring governing bodies.

"I'm not going to touch a thing unless the R&A ask for it or approve it. I have the greatest respect for the R&A and for Peter Dawson. I won't do anything to the golf course at all without their full stamp of approval."

Turnberry last held the Open in 2009. It would expect to host another one at least by 2020. Trump, presumably, cannot wait for the occasion, when it is hard to believe he will make himself scarce. The worry for some is that the Turnberry owner would try to turn Open week into a Donald Trump circus.

Personally, I'd doubt it. Trump is rich, brash and egotistical, but all of these attributes are forgivable. On occasion, they can even be helpful.

It may be, in the face of much cynicism, that Trump is as sound a protector as Turnberry could have.