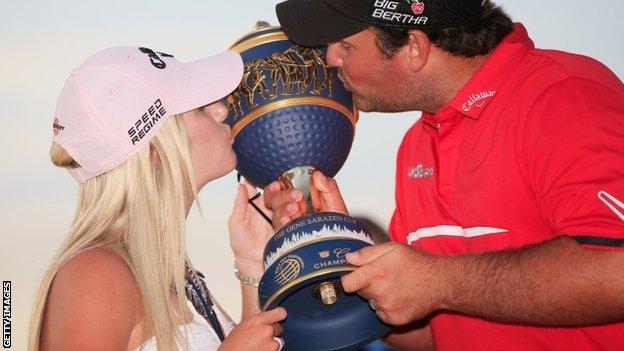 American Patrick Reed claimed his third PGA title as a one-under-par final round 71 gave him a one-stroke win in the WGC-Cadillac Championship at Doral.

Two ahead overnight, Reed, 23, the world number 44, soon moved four ahead with three birdies in his first four holes and finished on four under.

World number one Tiger Woods, who began three shots off the lead, had more back trouble in his 78 and was nine adrift.

A total of 249 balls finished in the water during the first three rounds and although conditions were tranquil on Sunday, with light winds and clear skies in Florida, the severity of the remodelled Trump National course caused more pressure for the players.

Woods was a strong favourite to capture the title for the eighth time following his superb 66 on Saturday.

But after failing to birdie the opening par five, his second shot at the third finished short and right and plummeted into the water and it needed a majestic pitch to three feet to limit the damage to just one shot.

Another bogey followed at the fourth when his tee shot found the bunker and he missed from five feet.

Woods, who withdrew from the final round of last week's Honda Classic with a back injury, appeared to aggravate the problem playing out of a fairway bunker at the sixth, where he dropped another stroke.

Reed, in the final day red shirt and black trouser outfit favoured by Woods, had been four strokes ahead and in complete command until the 14th when he missed from three feet for a par and then put his tee shot at the next into the bunker.

But a magnificent escape from the sand finished inches from the cup. He elected to take an iron off the tee at the par four 18th and took three to find the green, but two putts for a bogey was enough to make him the youngest winner of a WGC title.

"My putting was outstanding and when that happens a lot of pressure comes off your full swing - I believe I am one of the top five players in the world," said Reed, who is yet to play in a major championship but will move into the top 20 in the rankings with his victory.

Former Masters champion Watson had a bogey-free 68, and saved par with a neat chip and putt from behind the 18th green after his second shot careered into the grandstand.

But Donaldson produced a superb approach to within a foot of the flag at the 17th for his fourth birdie of the round to edge ahead of the American and within one of Reed.

However, the 38-year-old Welshman pushed his second at the final hole into an awkward spot in a greenside bunker and missed a 16-footer for par, giving him a round of 70 and Reed a two-shot advantage up the last.

Scotsman Stephen Gallacher, eight back after round three, birdied four of his opening eight holes, sinking a putt from off the green at the fifth and coming within inches of an eagle at the eighth.

The 39-year-old found the water at the 16th to drop his only shot of the round but finished with a round of 69 to tie for sixth place at one over.

Graeme McDowell bogeyed the final two holes to finish in a share of ninth at two over and Rory McIlroy returned a 74, with only one birdie at the first, to close on plus five and a tie for 25th.

US Open champion Justin Rose produced a fine run of six birdies in seven holes to get back to level par for the tournament but shanked a bunker shot and suffered successive double bogeys, recording a 73 for a six-over total and a share of 34th.