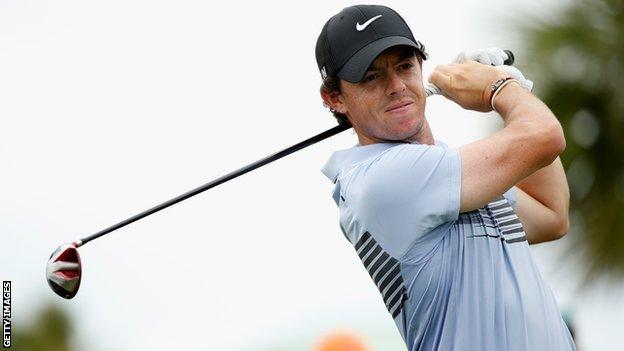 Rory McIlroy trails by two shots in a rain-delayed first round of the World Golf Championships in Florida.

The Northern Irishman was one under par after 14 holes and trails clubhouse leader Harry English, one of five on three under, when play was ended early.

Graeme McDowell is a stroke further back on level par after 12 holes.

Defending champion Tiger Woods, who withdrew from last week's Honda Classic because of back pain, was two over after 10 holes at the Doral course.

The first round will be completed before Friday's second round.

McIlroy birdied four of the first five holes, but dropped two shots at the turn.

Despite his inconsistent form, McIlroy came off the course satisfied with his day's work at the Miami event, which forms a key part of the build-up to the Masters on 10 April.

He explained: "I said I'd be happy with anything under par from this round and I'm still on course for that. I would like to get something in the 60s."

The tournament is the second of the four World Golf Championships. Australian Jason Day won the first in the series, the WGC Match Play, last month, with the Bridgestone Invitational and the HSBC Champions later in the year.