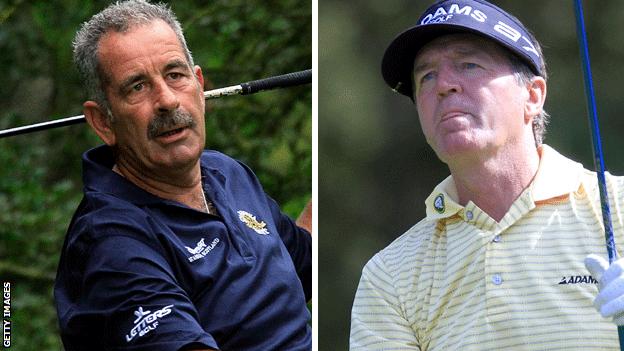 Paul McGinley has enlisted a wealth of trusted experience with the appointment of Sam Torrance and Des Smyth as vice-captains.

But Europe's Ryder Cup captain will not follow the lead of England football manager Roy Hodgson. There will be no sports psychologist in his backroom team at Gleneagles in September.

How often do we hear the adage that golf is a game played in the head? This is especially the case in the gladiatorial environment of the Ryder Cup.

But, with good reason, McGinley is not going to take the route of Hodgson, who has enlisted the services of Dr Steve Peters for the World Cup in Brazil.

"All these players have their own teams around them," McGinley told BBC Sport. "To impose somebody for one week would be unfair to the player and to the person brought in.

"So I will let them work within their own environment of the team they have around them. And then we will all mould together as the European team."

It's another example of McGinley's sure-footed leadership. In Torrance and Smyth, he has two allies who command the utmost respect.

The European skipper's relationship with Smyth goes back to his teenage years. They first met when McGinley was just 17.

They have shared countless dinners and, in many respects, the 61-year-old Irishman has been a mentor to McGinley.

The fact Smyth was an assistant to Ian Woosnam at the K Club in 2006 is another strong tick in the box, not to mention his experience playing in the 1979 and 1981 matches.

Torrance and McGinley are inextricably linked after the latter holed the winning putt in 2002 when the Scot was in charge at the Belfry.

Torrance, 60, plays down his role as a Scot at Gleneagles, but having on board a representative from the home country is another asset to the European cause.

His role as a television commentator at several European Tour events means Torrance remains firmly in touch with the modern game.

He is an unflappable figure who will help calm the inevitable nerves that abound during the three days of competition.

With Smyth installed as a vice-captain to Miguel Angel Jimenez at this month's EurAsia Cup, he will have the opportunity of getting to know likely members of the Gleneagles side.

Certainly, it seems Europe's vice-captains are more in touch with the players than their American counterparts. Tom Watson has appointed veteran former major champions Andy North and Ray Floyd.

Not that Watson should be underestimated, and he will make sure his vice-captains are well acquainted with the US side by the time the match comes around.

McGinley is quietly satisfied with the early-season form of many of those likely to be in his team.

"Ultimately I want to end up with the strongest 12 players in Europe. I'm sure we are going to have some rookies, and Victor Dubuisson looks a certainty at the moment.

"The difficulty will be the three [wildcard] picks, but I think I've got two good people on my shoulder here who will help me make good decisions."

With Torrance and Smyth to lean on, and probably two more assistants to be appointed after the team is announced, the captain seems well equipped for the huge challenge of trying to retain the trophy this autumn.