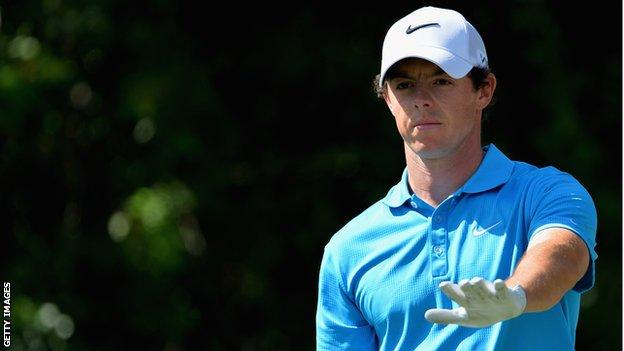 Rory McIlroy let slip a two-shot lead and lost in a play-off at the Honda Classic in Florida while world number one Tiger Woods withdrew injured.

Northern Ireland's McIlroy, who carded a four-over-par 74, missed a 12-foot eagle putt at the last to win outright.

Woods was forced to withdraw on the 13th hole because of back pain.

The American hit a five-under-par 65 on Saturday to move into contention but was five over in his final round when he quit.

His withdrawal comes six weeks before the Masters at Augusta - the first major of 2014 - which takes place from 10-13 April.

"It's going to be hard to get over because I had a great chance to win my first tournament of the season and I didn't.

McIlroy admitted he was fortunate to have reached the play-off after dropping six shots in 11 holes from the seventh, including a double-bogey six on the par-four 16th where he hit his ball out of a bunker and into water.

He followed that with another bogey on the 17th, which left him needing a birdie on the last to get into the play-off at eight under.

The 24-year-old gave himself a chance of victory though with a stunning second shot on the par-five hole that finished 12 feet from the hole but he was unable to hole the eagle putt that would have won him the title.

"It's very disappointing. It was a perfect opportunity to win. No one was really coming at me.

"There's a few positives to take, but obviously it's going to be hard to get over because I had a great chance to win my first tournament of the season and I didn't."

Henley, who qualified for the Masters, won at the first extra hole with a two-foot birdie putt.

"I was so nervous coming down the stretch," said Henley, who won his first PGA Tour title at last year's Sony Open in Hawaii.

"I hope I can have a bunch more Sundays just like that in my career. It was a rush to be out there playing with Rory and the crowd.

"I've never been part of a crowd so big cheering for me. It was an amazing feeling. It was so much fun."